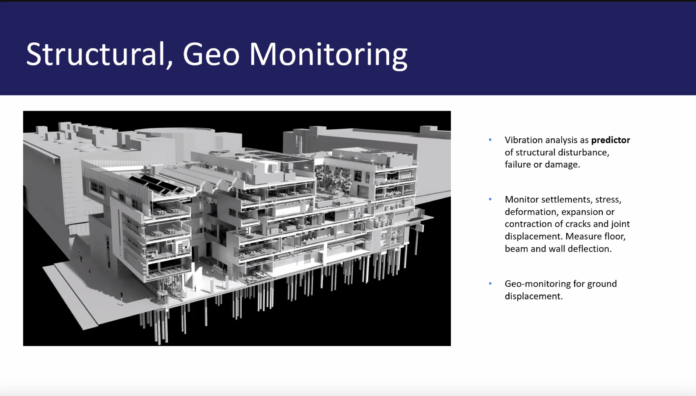 Dozens of vendors are competing in the Internet of Things (IoT) site sensor market, AON’s chief commercial officer David Bowcott told an online audience at a webinar, “The Rise of the Aware and Predictive Job Site,” co-ordinated by the Ontario General Contractors’ Association (OGCA) in January.

The challenge: Determining which systems are best to use – and how to manage them.

Each IoT provider has its own sensors and software – creating a challenge with the diversity of choices.

In response, Latium  has introduced a Job Sites Insights (JSI) backbone to integrate different in systems in one process, said Brian Kmet, a technology solutions specialist for the software provider.

Cody Nowell, construction services manager with PCL Construction, outlined some examples of how the contractor has gained advantages with JSI sensors and cloud-based integration and management systems.

In one case, in Edmonton the contractor deployed JSI with temperature and humidity sensors on a two-tower high rise project in Edmonton.

“The project had budgeted $175,000 for millwork damage and rework,” Nowell said. “The use of sensors and the careful monitoring of temperature and humidity avoided all of that in the estimate.”  As well, because of the sensors, the contractor could more effectively manage temporary winter heating costs, saving an additional $250,000.

Concrete monitoring savings on the J.W. Marriott project resulted in 1,100 hours of schedule savings by automating the process, compared to traditional testing methods. As well, safety improved because there “are fewer people on the site, fewer potential collisions between people and what have you, and also better testing quality was realized.”

In another case, in Toronto water detection systems caught a leak in a building’s pump room, setting in motion an automatic valve shut off. If the water had flowed until it had been detected by a human, there could have been “a liability of $300,000 in replacing the pump room equipment and the damages that occurred to it.” As well, damage caused by a plugged toilet in an unoccupied suite would have caused a requirement for rework, delayed occupancy, and other expenses.

AON’s Bowcott said the savings and advantages of IOT sensors integrated with a management backbone can vary, but in the case of water mitigation, they have reached a 95 per cent risk mitigation level.

These results mean that insurers are ready to partner with contractors in helping to fund IoT investments, and they are ready to increase and enhance coverage limits when they are satisfied that the monitoring systems are in place.

Progress is rapid, and Latium’s Kmet and Bowcott said that the next stage will be applying artificial intelligence from the data gathered to predict future and allay future problems, such as potential safety issues. As an example, Latium’s system includes a jobsite entry gate, where workers can be screened to ensure they have all the necessary safety qualifications and if there are issues, flag these potential problems to the contractor.

“Implementation doesn’t need to be very large or very expensive to mitigate a big amount of risk,” said PCL’s Nowell, noting that nearly half of the JSI implementations have been with the contractor’s special project’s division for jobs under $20 million.

In one case, “we had a temperature and humidity sensor within a mechanical room of a project”  and a worker left the room at the end of the day without ensuring it was properly insulated. “Temperatures dropped, and we were very close to having a freezing event on our main water line.  We got a notification and were able to mitigate the problem.”

If it hadn’t been caught, the losses could have been “potentially a six figure claim,” he said.

John Stephenson elected as president of Ontario Association of Architects