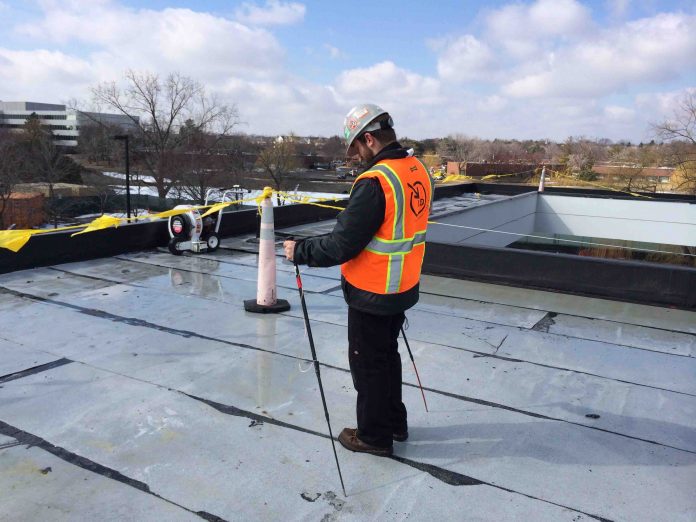 In opening to the North American market in 2001, International Leak Detection (ILD) introduced Electric Field Vector Mapping (EFVM®) as a pinpoint accurate troubleshooting method for leak detection on existing roofs and green roofs. Since then, the company has grown from its Ajax, Ontario headquarters to include a secondary office in B.C. and multiple offices in the U.S. including New York, Chicago and California.

As it grew, ILD also expanded its capabilities for verifications of new installations in roofing and waterproofing. Now celebrating its 16th anniversary, the company’s staff of 20 continues to grow with additional locations soon to be added.

Matthew Durrett, RRO (registered roof observer), ILD’s national sales manager, says that over time, company owner Chris Eichhorn has worked with global affiliates to set the standard for ILD’s European technology and testing protocol to meet the North American quality control standards to deliver lasting results by locating defects in roofing and waterproofing systems. “We developed EFVM® testing and still provide the most accurate testing in the world. Although other companies try, ILD will always have the best trained and motivated staff, along with many years of experience behind us that surpass all others.”

Durrett says that being an industry leader has meant partnering with several global manufacturers to perform third party quality control tests. “We provide a service they can count on to not only limit their liability but also to assure that their work is watertight with proven quality control from ILD. We have developed conductive mediums over the last 10 years that have become the standard which many manufacturers use as their basis for design in testing and project creation.”

ILD has also partnered with a company to develop and provide building envelope monitoring systems, he says, expanding its client services to meet the growing needs of the industry. “Smartex® is a flat roof monitoring system that provides an early warning of moisture penetration by sending a message to a PC, tablet or smartphone giving the location for repair to prevent further damage that a leak can cause.”

Due to their expanding presence, Durrett says ILD has the ability to respond to client needs all across Canada and the U.S., travelling to projects no matter the location. “In the last 12 months, we have had projects in the Bahamas, Mexico, China and almost every province and state in Canada and the U.S. We are able to handle projects upwards of 500,000 sq. ft. and have had some greater than one million sq. ft.”

As ILD grows, Durrett says it will continue to develop specific markets, whether it is architects, building owners, roofers, waterproofers or membrane manufacturers and provide unsurpassed customer service to industry leaders.

The case for Quality Based Selection: Does the lowest price provide...