Investment in Ontario new housing construction jumped $1.8 billion to $23.3 billion in 2017, driven by spending on single home construction, up $1.1 billion or 9.1% compared with 2016, Statistics Canada has reported.

Nova Scotia led the Atlantic provinces in spending on new housing construction ($836.0 million), with $117.7 million or 16.4% more investment compared with 2016. This rise was led by spending in apartment building construction, which was up $84.6 million (+33.2%). Newfoundland and Labrador was the lone province in the region to report a drop in total investment, down $62.7 million (-16.9%) compared with 2016.

In Western Canada, British Columbia, Alberta and Manitoba posted year-over-year increases compared with 2016. The rise in British Columbia (+$789.8 million) was driven by investment in apartment building construction, up $481.3 million compared with 2016. In Alberta, the increase (+$579.2 million) was the result of spending on single home construction, up $870.9 million, which offset lower spending on apartment building construction (-$374.5 million). For Manitoba, spending on singles house construction contributed nearly two-thirds to the total investment in new housing in the province. Conversely, Saskatchewan reported a year-over-year decline.

Nationally, investment was up for all dwelling types from the same month a year earlier. The $246.3 million investment increase in apartment building construction was the largest contributor, representing almost 60% of the national increase (+$426.9 million) in December.

A $162.9 million increase in Quebec in new housing construction stemmed from higher spending on apartment buildings, which rose 56.6% or by $175.3 million from December 2016. Conversely, singles, doubles and row homes all posted year-over-year decreases in construction spending.

Alberta recorded the second largest provincial gain in new housing construction investment (+$90.3 million). Increases were posted for all building types, but were mainly driven by a $68.8 million rise in investment in single home construction.

Investment in new housing construction was up by $82.2 million in British Columbia, distributed across all building types, but mainly attributable to spending on apartment building (+$35.7 million) and single home (+$32.4 million) construction. 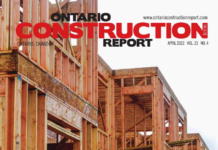