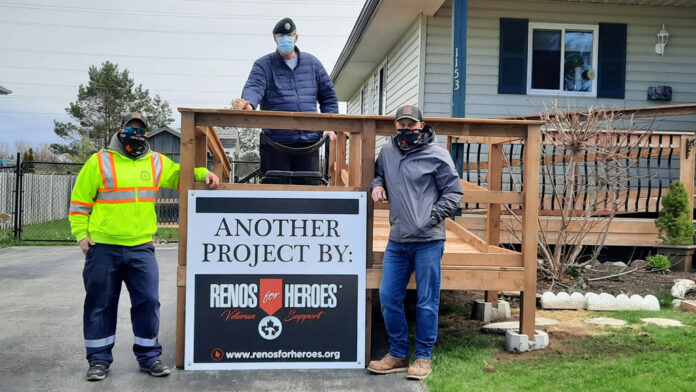 Determined to help injured Canadian veterans, Jim Caruk launched Renos for Heros about 10 years ago, know assistance available from the government was not enough.

“Having worked over 40 years in the building industry, I knew this was my chance to make a difference and how Renos for Heroes started,” Caruk said.

The Carpenters Union supports the charity is many ways – from raising funds to volunteering to build ramps and other projects designed to give injured veterans more independence.

Durval Terceira from the Carpenters Union has helped raise over $700,000 over the years by organizing an annual walkathon.

He pivoted to a virtual event due to the pandemic and has walked alone for the past two years – raising thousands for the cause and in total he has walked over 1,200 kilometres.

“I very much enjoy seeing the impact of Renos for Heroes,” Tereceira said. “Its amazing every time when you see something done for them .. even a ramp its very satisfying because of the difference it can make for a veteran.

“What I do is just a token of my appreciation. These are people who put their lives on the line for us and because of what has happened to them, some of those men and women .. they lie in prison in their own homes.

“Renos for Heroes takes care of that … and we should all do our part to help veterans.”

Donations come from individuals and organizations including the Interior Systems Contractors Association of Ontario, the International Union of Painters and Allied Trades and the United Brotherhood of Carpenters’ international.

Most recently, carpenters in Southwestern Ontario volunteered their time and skill to build a 40-foot accessibility ramp outside a veteran’s home.

John David Doyle retired from the Canadian Armed Forces in 2017 after 32 years serving in the infantry including tours in Cyprus, Croatia, Kosovo and Afghanistan.

Work was completed in about two weeks by members of Carpenters’ Local 2222 Kincardine and three members from the Carpenters’ District Council of Ontario (CDCO).

While R4H normally covers material costs, lumber and fasteners were estimated at $4,000 for the project, a cost paid by Local 2222.

“Being able to help out on the tools for somebody who sacrificed for our freedoms and is in a time a need…it was a good moment.”

More than 100 Canadian military personnel have lost limbs since the Afghan mission began in 2002 and some of these soldiers still do not have complete mobility in their homes. While the government helps, there is often a huge gap between the renovations that are covered versus what soldiers truly need for total mobility in their homes. Working alongside Canada’s Military Families Fund, RFH helps to complete home renovation projects for our injured soldiers.

The renovations that RFH provides are classified as “Quality of Life” renovations and are not covered by the government; this includes but is not limited to, wheelchair accessible outdoor spaces such as decks and pool areas as well as modifications to make a soldier’s favourite space in their home deemed non-essential (i.e. a hobby room) wheelchair accessible.

While some injuries are visible, there are also countless soldiers suffering with Post Traumatic Stress Disorder (PTSD) and RFH is here to help those soldiers as well. For members of our military suffering from PTSD, renovations that build a space that supports and fosters mental wellbeing is RFH’s goal. Quality of life renovations in these cases can come in the form of anything from a recreation room, a kitchen, to a home gym.