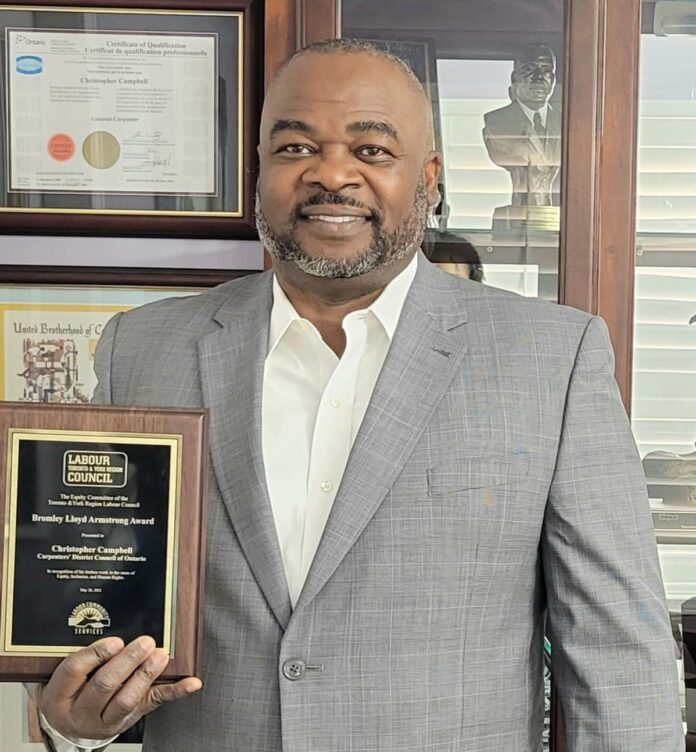 Those who know and work with Chris Campbell are often impressed by his commitment to the community and creating a more inclusive, diverse and equitable workforce.

His accomplishments received formal recognition recently when he received the 2021 Bromley Armstrong Award and the first-ever TCBN Diversity Award.

“It is an honor and a privilege to be a recipient,” Campbell said as he accepted the 2021 Bromley Armstrong Award in May, immediately thanking nominator Mike Yorke, president of the Carpenter’s Union Local 27, and the labour council’s equity committee and Labour Community Services for making this annual event possible.

Bromley Lloyd Armstrong was a labour activist, community champion, social justice leader, and societal visionary. A Jamaican Canadian member of the Autoworkers union who helped lead the Toronto Joint Committee on Human Rights in the 1950’s, Bromley died in 2018 and the award is presented each year to a labour activist who has demonstrated excellence in equity and human rights.

It was the second award in just a few weeks for Campbell who was named the Community Benefits Champion in April.

“Chris is an agent of change. He builds confidence, champions equality and breaks down barriers for the next generation of leaders to come. He leads by example and inspires others to learn and grow. He earned the trust of his peers and drives engagement. He forges genuine relationships between communities to enable change in a very positive manner and he strives to ensure its success.”

The Carpenters’ District Council of Ontario (CDCO) appointed Campbell as the Union’s new Equity and Diversity Representative in November 2020.

“The CDCO recognizes the importance of supporting community-building initiatives in our industry and championing diversity and inclusion,” said CDCO President Mike Yorke. “This brings us one step closer to creating a safe and equitable industry for Ontario’s more than 30,000 tradespeople.”

Campbell is known in the industry as a long-time champion of diversity, Campbell understands the importance of being an active member of his community. He has been a Business Representative of Locals 27 since September 2003 but dedicates his free time to being involved in many community-building initiatives.

“I have been volunteering in the local community for many years during evenings and weekends while working for the CDCO full-time,” said Campbell. “I’ve worked with the Toronto Police Service, the Jamaican Canadian Association, Helping Hands Jamaica, and many others Carpenters’ Union community outreach projects.”

Year over year, his work has engaged his colleagues, and inspired the leadership within his union to do more, and to do things differently, to ensure that Black, Indigenous and other racialized youth and adults, including women and newcomers, know about, are prepared for and access employment and apprenticeships.

His commitment to make improvements in the industry moved to new heights after a single incident last year.

“When nooses were found on our construction sites it was clear that action had to be taken to keep the family safe, to educate those who need it, and to let the perpetrators know such actions would not be tolerated,” he said.

Again, Campbell and the carpenters’ union immediately jumped into action.

“We expelled the guilty individual and worked with the city of Toronto and construction industry leaders which led to Mayor John Tory making a declaration of inclusive workplaces &and communities,” he said.

The result was the creation of an Equity Diversity Inclusion Committee and new training to our members.

“It is important to know why all of this was done and why I was compelled to be a leader in this work,” Campbell said in his Bromley award acceptance speech.

“It’s simple, racism is systemic as much as it is an individual acts of discrimination. Therefore, if racism is to be eradicated then our actions must be tactically systemic.

The Equity Diversity Inclusion Committee falls under his portfolio and covers all of Ontario. The charter of inclusive workplaces calls for construction industry leader to develop polices, programs and initiatives at every level to reduce and eliminate racism, intolerance, and bigotry.

Going forward, Campbell says he will continue volunteering in the community and taking opportunities to dispel stereotypes about the construction trade union industry and introduce the community members to a collective voice that they can be part of.

“My volunteering is an opportunity to pay the kindness forward that was shown to me as an apprentice carpenter. That is why I am so proud of my involvement as a co-chair with the Toronto Community Benefits Network because it brings union and community interest together.”