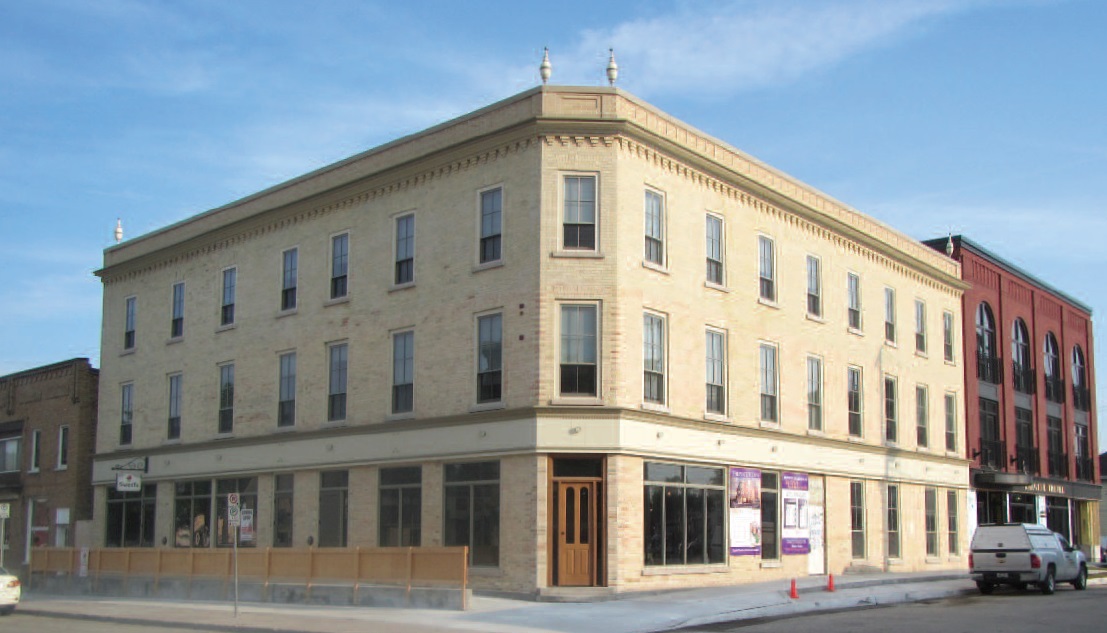 In April, two years after owner Marie Voisin took possession of the Imperial New Hamburg, the first retail tenants moved into their renovated suites within the 140-year old hotel.

The project, involving the restoration and redevelopment of the property, created both opportunities and challenges as many surprises lurked in the centrepiece southwestern- Ontario town building, including structural challenges once layers of previous renovation had been removed.

Bob Zehr from Nith Valley Construction (2008) Ltd. in New Hamburg, had been quoted as saying owner Voisin had set ambitious goals to maintain the building’s heritage qualities, while building new retail and housing for the Waterloo region community of about 8,000 people.

The original building was completed in 1872, with additional work in 1902 so not surprisingly, the building did not meet current code. The hotel’s upper floors had not been in use for decades; they didn’t have electricity or running water. Voisin purchased the building to prevent its total demolition – in more recent years, it had a bar on the ground floor and the upper floors were unused.

The project combines new construction and restoration, with a new internal structural steel frame to hold the heritage building together and meet current construction standards, Zehr said. Once complete, it will contain “12 elegant one-bedroom rental suites that will maintain the grandeur of the early 1900s” yet with modern amenities.

Connections to the building’s history include a lobby replicating the original 1872 space; an upgraded elevator with décor from 1902 found in the building; large baseboards, window and door trim copied from the 1902 originals; and vintage crystal chandeliers.

Modern amenities include spray foam insulation for soundproofing and energy efficiency, WiFi and data cabling, soft water throughout with filtered and purified drinking water and thermal-pane windows with screens.

Several elements will combine old and new including solid wood floors, hot water radiators and state of the art kitchens that combine modern amenities with 1902 design.

Empire Restoration was involved with the restoration of the exterior masonry. Principal associate Philip Hoad says his company rebuilt sections of wall on the south elevation, repointed the building and cleaned the old brick of paint. “We also rebuilt the parapet. This was not part of the original scope of work but the best solution once we realized how much damage there was.”

Hoad says Empire had six staff, including supervisors Andy Buchanan and John Jerrett, on site for four months to complete the work. “Most of what we completed was during the winter so tarping and heating was required.”

Besides the winter cold, he says another challenge was matching the historic brick. Fortunately, understanding that buff coloured brick is hard to come by, the company had purchased salvage brick several years ago that perfectly fit.

Located in the heart of the community, the Mill St. location will provide residents with walking access to banks, restaurants, retail, a medical building and churches. Suites will range in size from 720 sq. ft. to 1,029 sq. ft.

Common areas include a year-round sunroom with a fireplace and dining area and a private outdoor patio with views of the town. Retail tenants SweeTs and Imagine Travel both moved into the building at the end of April.

The Imperial will also house a microbrewery, restaurant with a bar, and additional retail areas on the ground level. There are senior rental units on the second and third floors, as well as a new rear addition.

A blog from Voisin announced: “This is not an April Fool’s joke. “It’s happening for real, it will be two years on April 30 that I became owner of The Imperial.”

Zehr says it has been two years of planning, design and construction on the fly. “All the time trying to meet the vision and expectations of Voisin and deal with inherent challenges of restoring a historic building.”