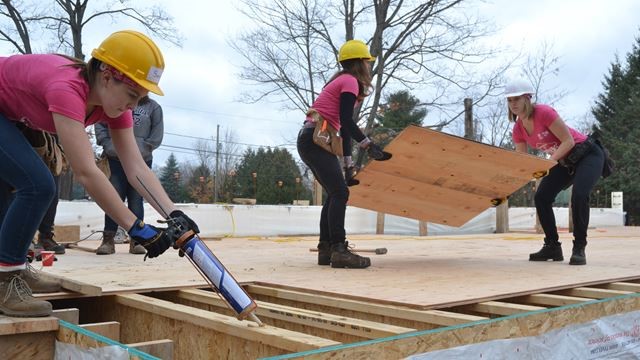 Eight girls recently participated in YWCA Muskoka’s Strong Girls, Strong World program to help with the construction of a Habitat for Humanity Home in Huntsville.

According to the online Muskoka Region, as part of the effort for Habitat for Humanity Ontario Gateway North, the girls “laid the sub-floor, built joists and rafters, and installed a wall” as part of the civic engagement and skills-building programs”

The girls reported a variety of reasons for taking part, including personal interest in potential construction careers in the future and a desire to help with the creation of a home.

Kirsten Nicolson, project co-ordinator for the YWCA program, was quoted as saying the program aims to encourage civic engagement and leadership opportunities for young women “with part of the project focusing on women in traditionally male-dominated careers.”

“We have focused a bit on women in trades in Muskoka, which we lack,” said Nicolson.

She said the region lacks both the opportunity for girls to learn skilled trades and women active in the trades.

She said it is important for girls to gain exposure to different careers, especially those that are not women-led or women-dominated. “A lot of the female-dominated careers are part-time with no benefits. To give them exposure to careers they maybe could be involved in here and keep them in Muskoka is important, too. We lose a lot of young people after high school.”