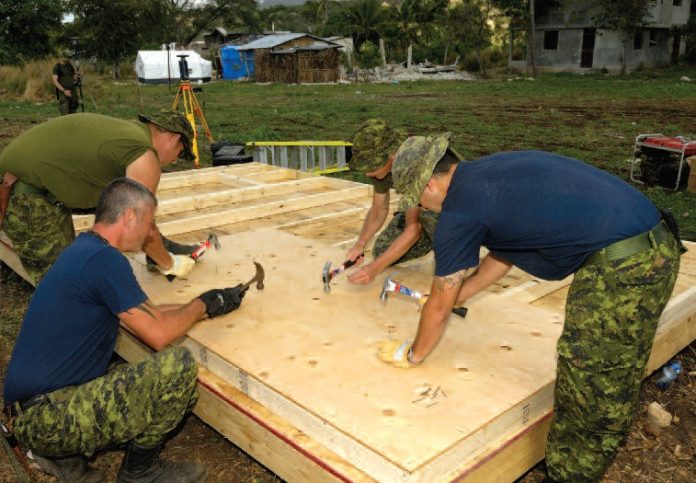 The story behind the initiative: Co-operation and coordination create foundation for ongoing achievements

Helmets to Hardhats (H2H) provides an opportunity for anyone who has served or is currently serving in the Canadian Forces to transition into a civilian career in 14 construction unions representing more than 60 different trades, through specifically focused programs.

The program recognizes soldiers may have equivalent construction related skills or qualifications from their military experience, and allows participants to accelerate or bypass conventional apprenticeship requirements.

H2H chairman Joseph Maloney helped found the U.S. Helmets to Hardhats program in 2003, on which the Canadian organization was modelled, when he was secretary-treasurer of the Building and Construction Trades Department of the AFL-CIO (American Federation of Labor and Congress of Industrial Organizations). In the U.S., he says, a key driver of the program was a shortage of construction workers in the early 2000s, a challenge that similarly affects Canada with the growing shortage of skilled labour.

As is often the case, the biggest challenge in getting the program off the ground was money. A meeting with Democratic congressman John Murtha, himself a Vietnam veteran, provided the financial kickstart that was needed.

“The program was for returning veterans (honourably discharged) in all of the armed services: army, air force, navy, marines and national guardsmen,” Maloney said. “We asked them to contact H2H, tell us when they were returning, where they wanted to live and what trade they would be interested in.”

Maloney says H2H connects veterans with relevant unions and reviews any prior training. The union then determines if the veterans would fit into a first, second or third year apprentice post or if they could move directly to journeyperson status. “Most military personal have construction industry experience so the fit was easy. These folks generally had grade 12, were drug free, had a good work ethic and computer skills.”

Once the program started getting traction, he says all of the trades and employers got on board. Almost all states in the U.S. have since made statewide executive orders to allow veterans to jump the queue to start apprenticeship programs.

The program has been expanded to all 50 states. “More and more employers have jumped on the bandwagon as they saw how much help returning veterans could give to their companies. These are people with leadership skills and frequently have training in the building trades. They’ve proven to be excellent employees and a big help to the industry.”

When Maloney returned to Canada, he designed a Canadian version of the program for the Building Trades department, which kicked off in 2012.

Again, he says, the biggest challenge proved to be funding. “We spent three or four years lobbying everyone at every level but no one would make a commitment to support the program. Then, one day, I was on a plane to Saskatoon and found myself sitting beside (former NDP leader) Jack Layton.”

Though Layton knew nothing about the program he was curious and a few days later, Maloney met with Layton, his veterans’ affairs critic and some staff in Ottawa. “At the end of the meeting, Jack told me he got along very well with Prime Minister Stephen Harper in private, and that he was he would bring Helmets to Hardhats up.”

H2H became part of the Conservatives’ next budget. Maloney says the $150,000 initially committed was small but once the federal government was on board, others followed. “Provincial governments in Alberta, Ontario and New Brunswick joined after the federal contribution. That started the ball rolling.”

“But I have to give credit where credit is due. The only reason Helmets to Hardhats took off in this country is because Jack Layton supported us behind the scenes. He was instrumental in talking to Harper and getting him to support our program.”

Today, in Canada, H2H gives former military personnel a chance to get started in a good civilian career after they are discharged from the armed forces. Veterans can connect through H2H’s website, or any building trades union local to get started in the program.

“And H2H helps in areas other than construction. If someone has learned computer programming in the armed forces, we’ll help them get a job in that field to the best of our ability.”

Program components include outreach, intake and placement. Maloney says the ideal time to connect is when veterans are nearing discharge time. Through questionnaires on the H2H website, skills and level of training in various areas is assessed.

“Then we work with our local unions and their apprenticeship co-ordinators to place them in our apprenticeship programs,” Maloney said. “Depending on their skills and training, they might end up in year one or year four of an apprenticeship. Or they might be able to start right away as a journeyperson.”

H2H also works to raise its profile among businesses, through promotional and fundraising initiatives. “After our $150,000 of seed money, we have never received any further federal government funding. We’re now entirely privately funded, and that’s the way we want to keep it. So in addition to the help we get from our member unions, we’re always looking to bring business onto our team.”

Maloney says H2H recognizes the challenges former military personnel can face returning to civilian life and this is just one way to give back. “Our veterans are the backbone of our country. They’re ready to sacrifice themselves for us every day they’re on duty. For what these brave woman and men do for us, I’ve always thought this is the right thing to do for them.”

For more information, on Helmets to Hardhats, visit http://www.helmetstohardhats.ca.