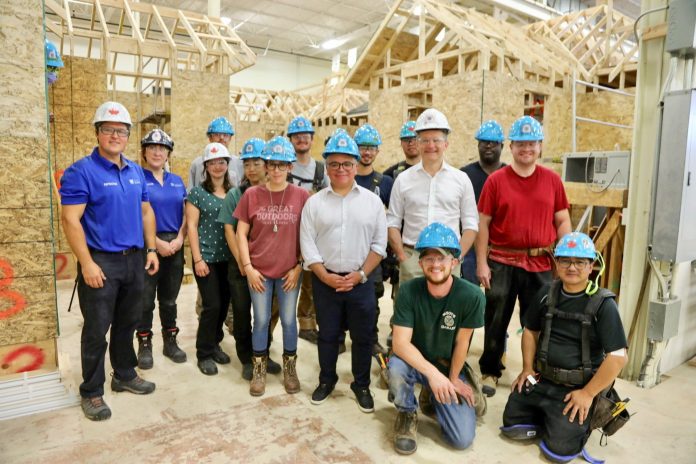 While some bank economists call government plans to more than double the pace of national home building excessively ambitious, if not impossible given supply shortages and soaring costs, a counterpart at the Canada Mortgage and Housing Corporation (CMHC) has another point of view.

“The important thing is to appreciate the scale of the task. It is a call to action,” CMHC deputy chief economist Patrick Perrier said in the wake of report by the Crown corporation that estimated an additional 3.5 million housing units would be required across Canada by 2030 to “achieve affordability.”

Perrier said the volume of units outlined in the CMHC report could be tweaked as market conditions evolve and if, for example, the economy slides into recession, but he doesn’t foresee significant revisions.

“What is important is the size of the task. It’s not something we can brush under the rug. We do have a structural gap between housing supply and demand and if we don’t change the way we build, the way projects are approved, the gap will increase.

“Over the past 15 years or so the pace was not enough,” Perrier added, saying forecasters have failed to account sufficiently for increases in income and housing demand in tandem with population growth.

Faced with what it calls a housing crisis, the federal government in its April budget detailed a plan to underpin a building boom to bolster the housing stock with the aim of making ownership and rents more affordable. It didn’t take long for a number of economists to weigh in on whether the promise was realistic.

They pointed out that the construction industry, already near capacity, is facing labour and materials scarcity amid elevated hard and soft costs and as completions surpass levels not seen since the 1970s.

“Dollars for donuts this will not happen,” BMO senior economist Robert Kavcic wrote in a note to investors soon after the budget was tabled.

“Without a targeted immigration plan or a concerted effort to convince young residents to consider taking up a hammer rather than a laptop we are going to continue to struggle to ramp up supply.”

David Wilkes, CEO of the Building Industry and Land Development Association (BILD), agreed that a shortage of skilled labour is a major impediment to building goals. He said the changes needed to facilitate permanent and temporary foreign construction worker immigration, including  a path to citizenship for all skilled tradespeople, are a matter of public policy. “Anything is possible, if there is political will,” Wilkes added.

During a tour this week of the College of Carpenters and Allied Trades training facility in Vaughan, federal Minister of Labour Seamus O’Regan said government and unions can work together to address labour shortages in the construction sector in part through a greater emphasis on online learning.

“There is important work ahead to train up workers and  to make the sector inclusive to those from diverse backgrounds,” he said in prepared remarks, noting that Canada is adding construction jobs at a record clip with leading increases in Ontario.

The construction industry grew by 76,400 workers in May, the largest month-over-month gain in employment in nearly two years, data from the most recent Statistics Canada Labour Force Survey shows. At 7.3 per cent, the industry’s job vacancy rate has reached its highest-ever level, with construction employers across the country in March looking to fill an unprecedented 81,900 job vacancies.

“It’s going to require the right investments in training and apprenticeship,” the minister said, adding that the government is doubling Union Training and Innovation Program funding and investing to help apprentices from underrepresented groups begin careers in the trades.

It is also launching a union-led advisory table to advise on the changing labour market and is making good on a commitment to introduce a new labour mobility tax deduction while providing up to $4,000 in travel and temporary relocation expenses for workers in the building and construction trades.

In Ontario, the Progressive Conservatives are promising to support construction of 1.5 million homes in 10 years, double the pace of current building, after house prices in Ontario nearly tripled in the last decade.

It commissioned a task force that set out a blueprint on how the target could be reached that included 55 recommendations, from ending exclusionary zoning to encourage densification, to setting uniform provincial standards for urban design, to prioritizing digitization and e-permitting.

The Ford government subsequently introduced legislation to speed up the building approval process but many of the task force recommendations were not included, particularly a change in municipal zoning rules to allow more housing to be built aside from single-family homes.

Residential builders association RESCON in a government submission said it believes the Ontario housing target can be reached, but only if all of the task force’s recommendations are adopted.

“I think that the real debate should be about the types of homes, not the aggregate number,” added University of Guelph real estate professor Paul Anglin.

“That debate would reveal whether it can be accomplished (and, if not, what changes would be needed to make it happen). I suspect that the barrier is not about government finance but municipal politics, supply chain impediments and having enough skilled tradespeople.”

Home 2 Suites in Brantford goes up quickly and efficiently with...