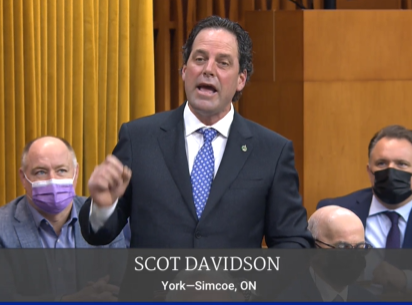 “Mr. Speaker, it’s time to get York-Simcoe moving,” he said in the House of Commons in February. “After decades, the Bradford Bypass is finally getting built ensuring that residents can get from Highway 400 to the 404 faster and safer than ever.”

The route is planned to connect Highway 400 and the 404, the two main highways drivers use to go north from Toronto.

Davidson’s strong support came as the federal government rejected a request to intervene on Ontario’s plans to build the highway through the protected Greenbelt north of Toronto. Federal Environment Minister Steven Guilbeault announced his decision Thursday in a letter to a local advocacy group.

“There is no basis to revisit the former minister’s determination,” Guilbeault wrote.

Former Environment Minister Jonathan Wilkinson turned down calls for a federal environmental assessment in May 2021.

With renewed federal support, the Ford government is expected to continue fast-tracking the highway, hoping to get shovels in the ground on early works like bridges this spring.

In October 2021, when the Ford government exempted the bypass from having to undergo a new environmental assessment and then announced that the project would be fully funded by the province.

An RFP was issued in November for the design and build a bridge for the highway in November. A preliminary design is expected by December 2022, with the highway completed by 2024.

Davidson says the new highway will “ease congestion and gridlock, bring economic benefit and ensure that our growing region is ready for the future.” He also said the project is supported by 85 per cent of residents, including Holland Marsh farmers and the bypass is being built “to reduce emissions, combat climate change with minimal impact on the environment and the Lake Simcoe watershed.

“Downtown activists are trying to stop the bypass from being built . . . but they don’t know how needed the highway is. York Simcoe is glad that the Ontario government is moving ahead with the bypass. Let’s get it built!”

Environmentalists are disappointed by Guilbeault’s decision that they say conflicts the federal government’s stated goal to advance climate action.

“Planning for growth should be done in a way that maximizes the value of increasingly threatened natural resources,” the Simcoe County Greenbelt Coalition said in a statement.

“This is only prudent. As we see more growth demand for these resources will only increase. Using them wastefully now means what they are able to provide in the future will be less, leaving us reliant on food imports, which increases the risk of prices shocks, and expensive technological fixes.

“Stop the sprawl inducing Bradford Bypass and 413 highways. They are a threat to our future.”

Grieving together on Day of Mourning

Principles of creating a “complete and sustainable community” in the Midhurst...