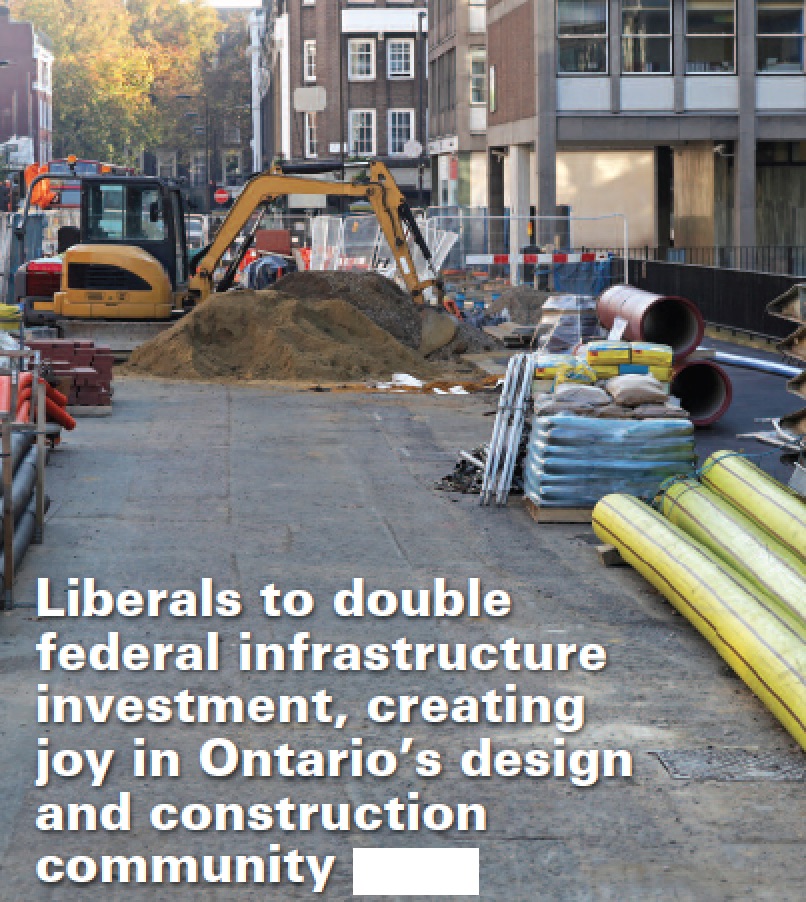 The new Liberal government’s plans for a massive increase in federal infrastructure spending has generated much enthusiasm within Ontario’s design and construction industry community.

The scale of the investment – nation-wide doubling infrastructure expenses to nearly $125 billion over 10 years from $65 billion – will create mammoth-sized opportunities for the industry, especially in the Liberal’s priority areas of transit, green projects, and social infrastructure (including senior and low income housing, and recreational and learning facilities.)

The Liberals don’t break down how much will be spent in Ontario. Notably, when the Conservatives introduced a major infrastructure stimulus program after the late 2008/9 financial crash, much of the money found its way to the National Capital Region, though the longer-range plans appear to be intended to distribute the wealth more widely across the province and country.

In the election campaign, the Liberal Party promised: “Each year over the next decade, we will steadily increase federal infrastructure investment.”

The party platform – which can be implemented without hindrance with a Liberal parliamentary majority – says the added additional investment will be $9.5 billion a year. “This will almost double federal infrastructure investment to nearly $125 billion – from $65 billion – over 10 years, which will be the largest new investment in infrastructure in Canadian history.”

The Liberals also promised to develop bilateral agreements with the provinces (including Ontario) and territories, “similar to those created for the successful gas tax transfer to cities and communities.”

“We will not only significantly increase the sale of federal infrastructure investment; our plan will provide provinces, territories and municipalities with an unprecedented level of long-term predictability in funding as well. This will be done in full respect of provincial jurisdiction.”

To add to more immediate stimulus, the government plans to double federal infrastructure investment in the next two years to $10 billion per year from $5 billion.

Similar allocation/increase will be provide for social infrastructure projects and what the Liberals call “green infrastructure” with priority in “affordable housing and seniors facilities, early learning and child care, and cultural and recreational infrastructure” as well as “local and wastewater facilities, climate resilient infrastructure, clean energy and clean-up of contaminated sites to facilitate new construction.”

The government says it will “reform and increase the transparency of the New Building Canada Fund by providing clearer project criteria and faster approval processes.”

The Liberals say their government “will automatically transfer any uncommitted federal infrastructure funds near the ned of any fiscal year to municipalities, through a temporary top-up of the Gas Tax Fund. This will ensure that no committed infrastructure money is allowed to lapse but is intended always invested in communities across the country.

The government says it will establish The Canada Infrastructure Bank (CIB) to “provide low-cost financing to build new infrastructure projects.”

“This new CIB will work in partnership with other orders of governments and Canada’s financial community, so that the federal government can use its strong credit rating and lending authority to make it easier – and more affordable – for municipalities to finance the broad range of infrastructure projects their companies need,” the Liberal policy statement says.

“Lending from the CIB will be linked to balance sheet assets, and will not require any increase in the federal government’s accumulated deficit.

“The Green Bonds will fund projects such as the electrification of transportation, smart grid technology and transmission lines for renewable energy, electric vehicle charging stations, and clean power storage. Where appropriate, the CIB will issue Green Bonds to the public so they too can invest in such projects.”