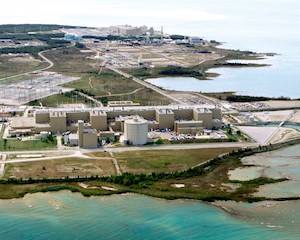 As Bruce Power begins the next phase of the Life-Extension Program, the company released its first-ever Ontario Energy Report last week at the Toronto Regional Board of Trade.

The report details Bruce Power’s4 support of the province in achieving several policy goals while advancing nuclear medicine and health care in Canada and around the world.

“Our Life Extension efforts are creating opportunities for people and communities with a focus on the environment, energy and the economy, and that’s why we are releasing this report,” Mike Rencheck, President and CEO said in a statement.

“It’s important that we communicate these facts, and the intention of the Ontario Energy Report is to provide accurate, verifiable and concrete information.”

“Bruce Power is, and will continue to be, a major contributor to providing Ontario with carbon-free, affordable electricity that allows our province’s businesses to grow and our families to prosper, and life-saving medical isotopes to help people around the world.”

Highlights of the report:

The report details Ontario’s leadership role as the first jurisdiction in North America to end its use of coal-fired electricity – a milestone that was achieved in 2014.

Bruce Power’s refurbishment of four nuclear units brought 3,000 megawatts of reliable, low-cost and carbon-free electricity back to the grid and provided 70 per cent of the electricity needed to take coal-fired generation out of Ontario’s power supply.

Today, nuclear accounts for more than 60 per cent of the province’s supply with Bruce Power providing more than 30 per cent of Ontario’s electricity at 30 per cent less than the average cost to generate residential power.