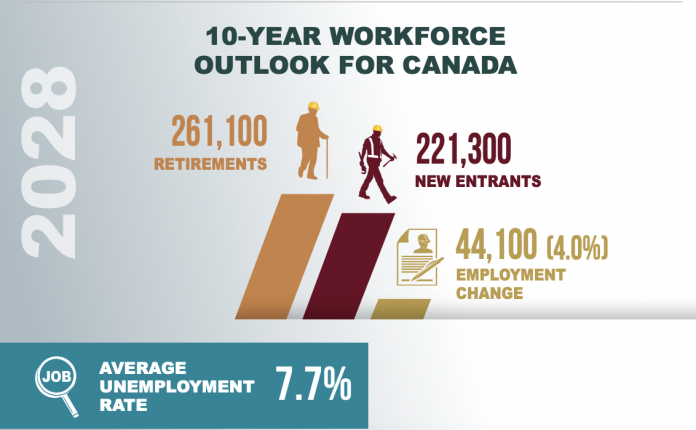 BuildForce Canada projects that Ontario’s construction employment will thrive in the years ahead and it will be challenging to replace retiring workers.

The organization says in its  2019–2028 Construction and Maintenance Looking Forward national report that Ontario, “led by the Greater Toronto Area (GTA), is expected to remain one of the hottest construction markets in Canada over the coming decade.”

“As major project requirements approach an anticipated plateau in 2020, keeping pace with rising employment demands across most of the province’s regions will remain a challenge for industry,” the report says. “The 2019 outlook scenario for Ontario projects overall employment will be sustained at high levels over the decade, driven by major nuclear refurbishment projects in the GTA and Southwestern Ontario, and continued investment in
public transportation and infrastructure to keep pace with a growing population. The pace of activity in new homebuilding is expected to moderate, but population growth should sustain high levels of demand for condo, mid- and high-rise markets in urban centres.

“The construction and maintenance industry will need to hire, train, and retain almost 103,900 additional workers over the coming decade, as 91,100 workers, the equivalent of one quarter (-25%) of Ontario’s current construction labour force, are expected to retire.

Nationally, the construction and maintenance industry will need to recruit an additional 300,200 workers by 2028, BuildForce reports. “While employment in the Canadian construction industry will be little changed over the next decade, adding approximately 44,100 workers or rising a mere 4 percent, when coupled with the anticipated retirement of more than 261,000 workers, maintaining future labour force capacity will require increased focus on recruitment.

BuildForce Canada forecasts construction employment in Canada will strengthen modestly through 2020, as demands driven by major energy, public transportation, and other infrastructure projects rise to a near-term peak, offsetting a continued softening in housing starts. For the first time since 2009, employment demand is projected to ebb after 2021, once peak project requirements are met. Slower population growth limits construction expansion nationally over the latter half of the 2019–2028 scenario period, although a period of moderate growth is expected to follow in most provinces to 2028.

“British Columbia is projected to lead construction growth in Canada, propelled by the start of a liquefied natural gas terminal, and transportation and infrastructure construction,” BuildForce Canada executive director Bill Ferreira says in a statement. “Ontario also continues to grapple with record levels of construction project activity and recruiting challenges. However, labour demands are projected to plateau or recede in most other provinces.”

Manitoba and most Atlantic provinces, with the exception of Prince Edward Island, are likely to see demands weaken and remain at lower levels of employment across the decade, most notably in Newfoundland and Labrador as several projects there end. Alberta and Saskatchewan are expected to see modest declines, but recover over the longer term due to renewed increasing demand for housing and the proposed starts of new projects. At the same time, demands in Quebec are sustained at recent peak levels by major project requirements.

Slower population growth and affordability challenges are expected to lead to lower demand for new housing to 2023, translating into fewer total jobs in the industry, but with retirements far outstripping reduced jobs, thousands of new workers will be required. Momentum is regained thereafter, as residential employment then rises from 2024 to 2028. Total residential employment is expected to rise by 8,400 jobs, or a modest 2% increase from 2018 levels over the next decade, as employment related to new housing is absorbed into renovation and maintenance work.

At the end of the decade, non-residential employment is expected to increase by 35,700 jobs – an overall increase of 6%, with gains in maintenance, and industrial, commercial, and institutional (ICI) building construction offset by modest declines in engineering construction.

Industry retirements will be an important national labour story over the coming decade. Canada’s construction industry must face the challenge of the retirement of more than 261,000 workers – 22% of the current labour force. Based on historical trends, Canada’s construction industry is expected to draw in an estimated 221,300 first-time new entrants aged 30 and younger from the local population. Much of the expected entry of young workers will depend on industry’s ability to keep youth interested in the trades.

The development of skilled tradespersons in the construction industry takes years, and often requires participation in a provincial apprenticeship program. An ongoing commitment to training and apprenticeship development will be necessary to ensure there are sufficient numbers of qualified tradespeople to sustain a skilled labour force over the long term.

Building a sustainable labour force will also require the construction and maintenance industry to increase recruitment from groups traditionally underrepresented in the current construction labour force, including women, Indigenous Canadians, and new Canadians.

Similarly, Indigenous Canadians also represented a small percentage of the construction labour force, accounting for little more than 4.9% of the total. Increasing the participation rate of both these groups would go a long way to helping the industry address its future labour force needs.

Over the coming decade, Canada is seeking to admit an average of 300,000 newcomers every year, making the immigrant population an important future source of potential workers. New Canadians currently make up 18% of Canada’s overall construction labour force.

“Maintaining capacity to meet construction labour force needs will require focused efforts on recruiting, training, and retaining young workers, even under a slower-growth scenario,” says Ferreira. “Even if the full potential of interprovincial mobility is realized, industry will likely still need to expand recruiting efforts for new workers from local sources of labour, from other industries, and from new immigrants to meet the industry’s long-term needs.” 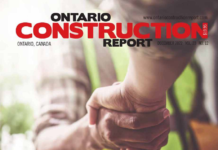