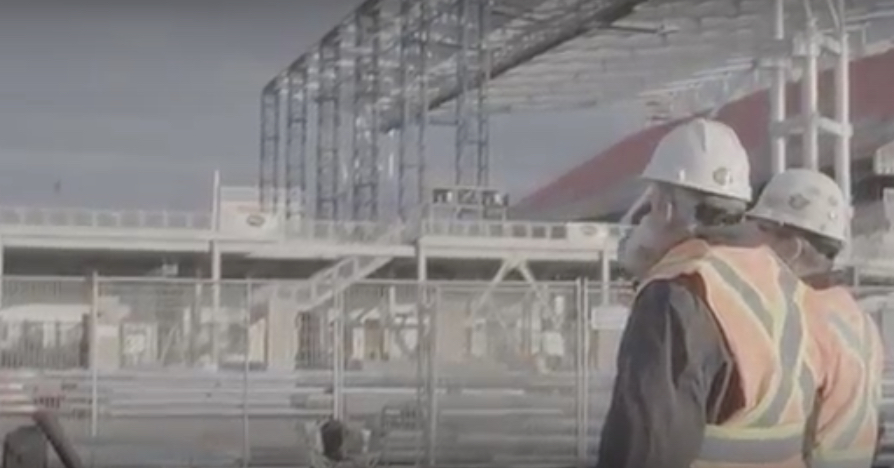 In a feat of engineering that has dramatically transformed the skyline surrounding the City of Toronto’s historic Exhibition Place grounds, PCL Constructors Canada Inc. (Toronto) raised the roof on BMO Field’s south concourse on Feb. 21.

“A critical lift such as the one we performed to raise the roof on BMO Field is an orchestration of precision and patience to ensure that every element goes exactly as planned,” PCL Toronto senior project manager Neil Barrows said in a news release. “We have been methodically planning for this moment for over two years in coordination with our partners to ensure it’s done right for the safety of all workers and the enjoyment of fans.”

Assembled on site as one massive structure weighing over 490 metric tonnes (980,000 pounds), the south canopy was lifted in tandem by two lattice boom crawler cranes. With a combined lifting capacity of 1,000 metric tonnes, the two massive cranes simultaneously lifted and then crawled the 377 by 68 foot canopy from the foot of the south concourse, enabling it to be incorporated into the roof structure that will cover the east, west and south stands. Transported from Holland, the CC2400 crane was so large that it necessitated over 100 tractor trailers to transport it to site.

PCL mobilized on site in mid-October, following completion of Toronto FC’s 2015 season to complete the second phase of an aggressive two-year project that has seen 8,400 seats added to the east grandstand, a continuous concourse level, kitchen, and enhancements to washrooms, concessions, and executive VIP spaces. The second phase of the project has focused on creation of the canopy roof.

“To bring MLSE’s vision of providing fans with an enhanced experience to life we brought together an expert team of subcontractors to collaboratively develop an approach to expand and enhance the aging stadium within its existing structure; while aligning the plan with MLSE’s business goals to fast-track the schedule and provide maximum return on investment,” says PCL Toronto vice president and district manager Bruce Sonnenberg.

The east and west canopies were built on-site in 100 by 40 foot sections and lifted into place from the stadium’s exterior to prevent damaging the field. Four steel super-columns have been constructed in each corner of the stadium, their foundations plugged into bedrock using a system of micro piles drilled 7 meters into the ground, along with three enormous legs forged together at various levels to support the load of the roof trusses.

“The two-year renovation of BMO Field is a tremendous project for our teams, our fans and for the entire city of Toronto,” said Bob Hunter, chief project development officer for MLSE. “Working with PCL and valued project partners, we are transforming BMO Field into one of the top stadiums in Major League Soccer, and a venue that can serve as home to other world-class events as well. The next few months will be exciting for us all, to see the roof raised after years of planning, and it will be a very proud moment in May to see TFC take the field in front of a brand new, and sold out, BMO Field.”

Noront starts community consultations as it plans for $1 billion Sault....