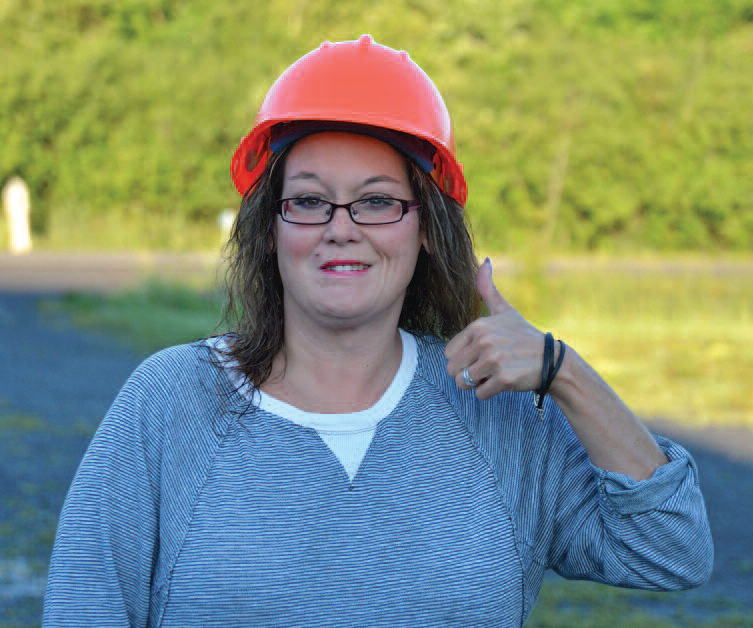 From an educational background in pastry and finance, Tacha Lehouillier found her way into construction. Today she is a controller with Ottawa based Regional Crane.

Lehouillier says she first was exposed to the industry at 18, when she worked in reception and payroll for a small drywall company. “From there I moved to an up and coming HVAC company (which) today is one of the biggest around.”

Deciding she wanted to try something new, she found work helping non-profits in finance, and also studied pastry arts at Algonquin College. She started a family, tried a few other things, listening to many along the way who suggested other career paths might be easier. She considered a career in government. However, eventually she decided to “settle down back where (she) belonged in the construction world.”

“In 2008 I had the opportunity to grow and take on the position of controller for Ottawa’s largest mobile crane company, Regional Crane Rentals Ltd.,” she said.

She says her role within the company is complex and hectic but says she knows that is where she is at her best. An understanding and acceptance of the industry’s ups and downs, and her own tendency not to back down when things get tough have helped her in this male dominated industry.

“I find many women tend to take things to heart, but I learned early on that this was not going to get me what I wanted (in my personal or my professional life). I knew I was going to have to work harder, as a woman, to prove myself – and I did.”

She says the construction industry may not be for the faint of heart, yet it is the most rewarding career for those who find a fit. “Once you are ‘there’ so to speak, the impact you make on people, on staff, on companies – can last a lifetime. I don’t regret ever heading in this direction – for me, this is truly what I need to be doing. This is me.”

In her role, Lehouillier has helped the company reduce expenditures and increase profit. She says this has always been her focus, adding that it did take time for her to hit her stride in balancing career and family.

Now she is responsible for major purchases including large pieces of equipment from overseas, and the largest mobile crane in Eastern Ontario and Western Quebec, the Grove GMK 7550. “This was a task that I did not take lightly. Not only was it a huge financial endeavour, but it put the company back on the map, as truly Ottawa’s largest.”

She says she enjoys that Regional Crane is a dynamic and changing company. The owners have new ideas, adventures and provide opportunities that allow the company and her to grow.

Lehouillier says she also enjoys her job’s pace. While some times are busier than others with projects, those slower times are still filled with hustle and bustle and month ends or other reporting that keeps her hopping, she said.

Though many construction related fields may be male dominated, women bring a lot to the table, she says. A strong woman with the right attitude and a tough backbone can be an asset to any company and respected by her male colleagues. Her advice to women considering a career in the industry is to not back down, to stay strong until any disbelievers come around. “No matter where you go, there will always be some who don’t think you can make it (construction or not). Don’t give in to those insecurities. Women are just as capable – and we do it with a smile.”

She says it is important to understand that if you want something, you need to go for it, no matter the industry, or specific field within it. While there are no guarantees that it will be easy, the rewards from pushing forward, from succeeding despite challenges, is worth it.

“I was fortunate early on to have great mentors, they helped me find myself in this chaos we call life. I had a very strong woman behind me early on and to this day I still look up to her. She has no idea how she impacted my life. I saw her struggles in the male world, but she never stopped fighting, she never gave up.”

Lehouillier says women also need to understand that asking for help is not a weakness and in the end, will get you farther than you think. “Respect takes time. Don’t give up when it gets tough. Take that chance to push yourself harder. There will come a time when the ‘shift’ happens and you’ll be happy you rode it out.”

Federal government to spend $11.8B on Ontario infrastructure