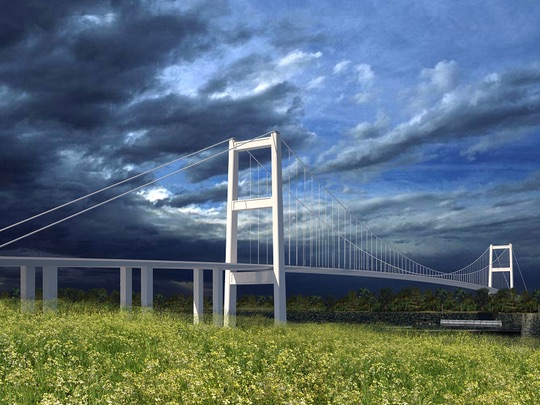 Requests for Proposals to design, construct and operate the Gordie Howe International Bridge connecting Windsor and Detroit are in the process of being finalized and will soon be sent to three international business conglomerates for bidding, Canadian Counsul General Douglas George says.

CORRECTION NOTE: In the original version of the story we reported six names were on the shortlist. This is inaccurate.

The Windsor-Detroit Bridge Authority announced in January that three of six teams have been shortlisted, including:

Construction would start next year and the bridge will open as early as 2020, George said.

He was the featured speaker May 10 at a meeting of the I-275 Industrial Council at Davenport University in Livonia, Michigan, Hometown Life reported. The council meets quarterly and is comprised of manufacturing managers, educators, policy makers, and other business people from Livonia, Westland, Plymouth, Canton, Wayne, and Redford.

The Windsor-Detroit Bridge Authority, a non-profit created by the Canadian government in 2012, will oversee the procurement process for the project as well as the construction of the bridge, which will be done by a public-private-partnership or “P3,” he said.

No single company is large or diversified enough to handle the project on its own. George said the conglomerates formed to handle all facets of the project and are comprised of large firms from the United States, Canada and the international community.

Talk about a new bridge goes back more than a decade. George said it has faced numerous obstacles to get to this point, from the Ambassador Bridge Company fighting it legally to launching a ballot initiative, which Michigan voters turned down in 2012.

“We will now complete on a level playing field to supply steel to this bridge,” he said. “Neither U.S. or Canadian companies will be disadvantaged.”

George said when the bridge is built, it will span about 1.5 miles with just more than a half-mile of open water underneath without piers. The P3 company chosen will determine the style of the bridge, a contemporary “cable-stayed” design or a more traditional suspension bridge.

It will feature six lanes, including one for expedited travel. George said passenger vehicles and commercial trucks will be separated. The U.S. side will also feature a direct connection to I-75.

Construction will disrupt both the Delray section of Detroit and Ontario’s historic town of Sandwich. George believes the benefits to both in the form of jobs will offset that impact, which will mean the bulldozing of about 300 Detroit homes and 45 businesses.

Federal government to spend $11.8B on infrastructure in Ontario