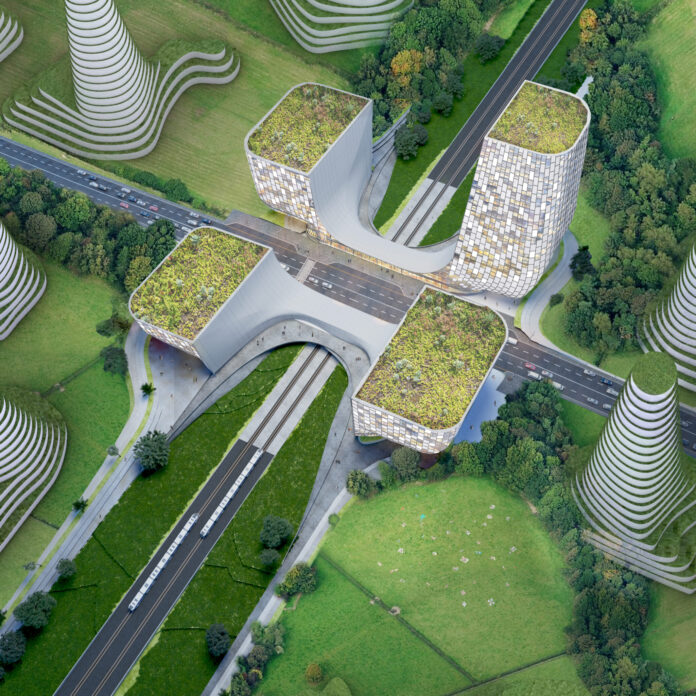 The Town of Innisfil is asking for a Ministerial Zoning Order to speed up the planning process for a massive commercial and residential development known as the Mobility Orbit.

If approved by the Minister of Municipal Affairs and Housing, it would fast-track the plan to be built around a new GO Station. It would include 200 housing units per hectare close to the transit hub – similar to Innisfil town council has voted in favour of requesting a Ministerial Zoning Order (MZO) for the Mobility Orbit development, a community planned around a new GO densities common in cities like Mississauga.

The MZO would also set the outer boundaries of the Orbit, redesignating the agricultural/rural land beyond the 425-m radius for urban use. A secondary plan would be required before development could proceed.

If the request is rejected by the province, developers would have to request an Official Plan amendment and zoning-bylaw changes.

Council says the MZO is needed to give the developer, Cortel Group, assurances that higher densities will be allowed. Cortel Group has agreed to upfront the cost of a proposed GO train station that will be built at the centre of the Orbit development.

Innisfil Mayor Lynn Dollin says without an MZO, an OP amendment that would “always” be appealed … more than once.

“It ends up with cases and settlements. The people who appeal it are not, for the most part, residents. It is developers who want their land to be the most valuable.

Mayor Lynn Dollin says without an MZO, an OP amendment that would “always” be appealed … more than once.

“It ends up with cases and settlements. The people who appeal it are not, for the most part, residents. It is developers who want their land to be the most valuable.

At a virtual council meeting, several councillors said they believe the developer deserves assurances that the town is prepared to proceed with their plan.

Councillor Alex Waters says the massive Orbit development “is the way of development for the future. “We are light years ahead of what Bradford is doing and what Barrie is doing.

“They may not see this as necessary in Innisfil, but I think it sets a trend for other municipalities to show that we are thinking light years ahead in terms of the importance of sustainability, the importance of climate change because this de elopement addresses all those.

Acknowledging that MZOs have negative connotations and could be seen as an attempt to circumvent a public process, Tim Cane says town staff “is not trying to bamboozle or shut the public out of the process.”

“If considered by the minister, the draft MZO is a tool that can ignite the proposed GO Station . . . while establishing the principles and framework to accelerate the wider Orbit Vision,” Cane’s staff report concludes.

While the province encourages municipalities to use MZOs when appropriate, this is potentially the largest MZO that anyone has asked for in the province..

Councillor Bill Van Berkel said  the minister could provide a guarantee of financial stability for the involved developers and the town.

“They need to know we are going to give them something,” he said.

Claire Malcolmson of the Rescue Lake Simcoe Coalition called it the request “a frantic gold-rush” approach to planning.

“I think that the MZO is problematic,” she said. “We really should scrutinize this plan. I think that this whole proposal looks a lot like it serves the developers and landowners and I’m concerned that that should not be the priority over the people of the town, the taxpayers of the town and the sustainability of the town.”

Steven Kirshenblatt has been an architect for over 40 years working in the GTA and across Southern Ontario.

He said he is concerned about the use of the MZO to expedite planning and the rush to get approval of a vision “that would forever change” the municipality. He called the MZO an “abuse of process.”

“By moving forward with an MZO you are asking residents to believe that the only way a GO Station will be erected on the 6th Line is to commit to the Orbit vision and a new city of 150,000 people.”

Kirshenblatt urged council not to proceed with “an undemocratic MZO that will change our town forever.”

Instead of requesting an MZO, he said the next step should be for the town to complete a full and complete secondary plan for the area.

“Let’s lobby for a modest, cost-effective GO Station that will encourage the development of the surrounding lands in a way that involves all of us … and protects Lake Simcoe and the environmentally-sensitive land around it.”

“I don’t believe you as a council has a mandate to implement such a major change to the Town of Innisfil and the Official Plan that was created just two years ago.”

In November 2019, Council adopted the vision for The Orbit. Since that time, and with the input of residents, stakeholders, professionals, Council and Town Staff, a conceptual design for the Orbit Station and immediately surrounding area was created and approved by Council on July 15, 2020, as per the recommendations of DSR-099-20. The project team has continued to work on the proposed station design and surrounding area with construction anticipated to commence as early as 2022.

However, the residential and employment development densities needed by the developer to secure financing for the proposed station and support the provincial Transit Oriented Community model requires an expedited planning approval process.

The Planning Act in Ontario allows for the minister to expedite the approval process that establishes how a piece of land is used for projects that may be of provincial interest. While any project can request an MZO, most recently MZOs are reserved for projects deemed by the minister to speed up economic recovery, provide affordable housing and support the concept of transit-oriented communities.