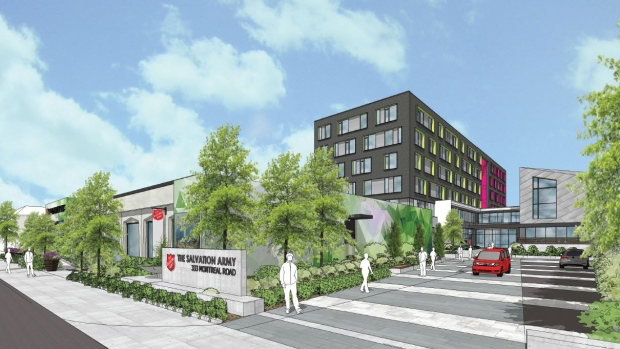 The chair of the Quartier Vanier Business Improvement Area (BIA) is skeptical about a study commissioned by the Salvation Army that suggests a relocated shelter and health complex would pump $15 million into the local economy, the Ottawa Sun reports.

Mark Kaluski said no business owner has told him that the proposed $53 million complex for 333 Montreal Rd. would bring a financial windfall for Vanier. Plans are for an emergency shelter, family services, life skill programs, addictions counselling and a special care unit.

“The report paints a rosy picture, but there’s a reason Ottawa neighbourhoods aren’t lining up to fight to get this project into their area,” Kaluski said Thursday.

Consultants Shore-Tanner and Associates had produced a report a few days earlier suggesting the community would receive millions of dollars in gross economic benefits and hundreds of spinoff jobs if the shelter and health services centre relocates to the community.

“In a vacuum, these numbers are a welcome investment into our commercial area,” Kaluski was quoted as saying. “What’s been disregarded is that the site could house an investment that would be a higher and better use of the lot.”

Kaluski said he has had conversations with other potential developers who would be interested in the motel property.

However, the Salvation Army has the conditional offer on the property and if city council approves a development application, the organization could have the complex built by 2020.

The BIA doesn’t see how creating a “mega shelter” would benefit Vanier, especially if it brings safety issues that pop up around the current Booth St. site in the Market area.

“If the (Salvation Army) can’t demonstrate that it wont be transplanting the same issues from the Booth Centre onto Montreal Road, then we have no reason to believe this will have a positive economic impact on Vanier,” Kaluski said.

The Salvation Army says its proposed complex would be properly managed and supervised and be designed as a secure facility.

The current zoning allows a health centre but not a shelter and council would need to allow an exception for the proposed project.

“There’s a reason for a plan and a reason for zoning and there’s no compelling reason to make an exception to that,” Kaluski said.