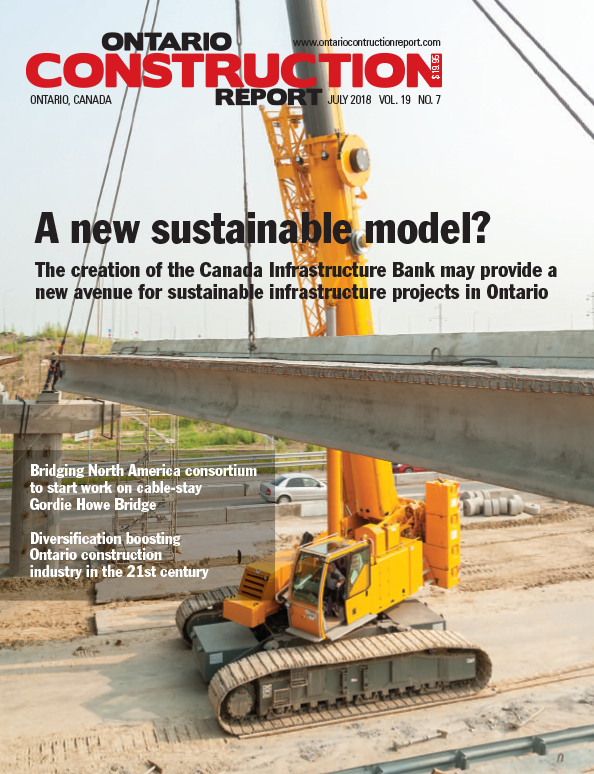 Two things have occurred recently that can move the needle in terms of infrastructure spending – especially in the area of sustainable development – something so widely discussed and looked at by all levels of government and citizens, for that matter.

According to the CIB website, “The Bank is a new tool that provincial, territorial, municipal and Indigenous government partners can use to access innovative financing for revenue-generating infrastructure projects.” The model will be built upon the already functioning public-private partnership (PPP) procurement method that creates partnerships between public institutions and private companies to create long-term sustainable projects.

A spokesman for the CIB notes the Bank will invest at least $35 billion over the next decade and will attract private-sector capital to the public infrastructure table.

Of that the government has earmarked $15 billion of the Bank’s funds to be divided evenly between public transit, trade and transportation corridors and green infrastructure projects, such as safe water systems and renewable-power generation

But how will it work with local governments, specifically Ontario?

For its part, Infrastructure Ontario, the arm’s length crown corporation that manages and helps build Ontario’s infrastructure, and the Ministry of Infrastructure is looking at the partnership and is taking a wait-and-see approach given that the CIB has not yet fully formed as an institution.

Says Sofia Sousa-Dias, a Ministry of Infrastructure spokesperson: “The Government of Ontario is committed to promoting sustainable infrastructure projects across the province. Federal funding is an important part of this plan, and we welcome the federal government’s commitment to investing billions of dollars in infrastructure nationwide,” she says. “We look forward to reviewing additional details of the design of the CIB as they become available and to working with the federal government particularly in relation to the design of the Bank and the various projects they intend to undertake. Specifically, we are looking forward to developing a mutually beneficial relationship between Infrastructure Ontario and the CIB as more details about the bank become available.”

The federal government is looking at partnerships through the Investing In Canada Lens. In the 2016 Fall Economic Statement and Budget 2017, the government gave its long-term vision for its infrastructure plan and committed to invest an additional $81 billion through to 2027-2028 in public transit; green infrastructure; social infrastructure; trade and transportation infrastructure; and rural and northern communities; and introduced the Smart Cities Challenge.

Of that money, $33 billion in funding will be delivered through Integrated Bilateral Agreements between the federal government, and each of the provinces and territories. And of that $33 billion, $9.2 billion will go towards green infrastructure projects.

The Bank’s spokesman further adds that it will:

Although the CIB is not fully operational, federal-provincial cooperation is already occurring in the sustainable infrastructure arena. For example, a new project in Thunder Bay has been approved under the Government of Canada’s Clean Water and Wastewater Fund. The federal government is providing up to 50 per cent of funding for this project – $325,000. The provincial government is providing more than $162,000, and Thunder Bay will provide the balance of funding.

Residents of the area will be given a new concrete pipe on James Street between Riverview Drive and Arthur Street that will redirect storm water into the river. This will reduce the risk of future flooding.

In addition to this project, $649,760 in federal funding for 11 other water and wastewater projects will benefit 10 other communities across Ontario (a total of 41 projects have been approved for funding). The provincial government is providing $324,881 for these 11 projects. This is part of the Clean Water and Wastewater Fund (CWWF), which is also born out of the Investing in Canada plan.

It would appear that at the federal level, there is a willingness and momentum to continue sustainable infrastructure projects through vehicles like the Investing in Canada plan and the newly created Canada Infrastructure Bank. The Bank’s yet-to-be fully formed structure; Ontario’s wait-and-see approach and the policies of the new provincial Conservative government may further determine what direction sustainable projects take in the future.