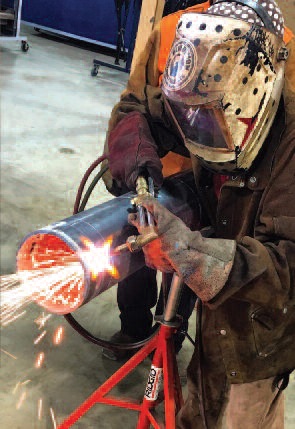 Bailey McKendrick knew in her late teens that she wanted to be a welder. Today she is an apprentice welder.

Initially deciding to try other options, McKendrick says she attended university for a time, and then realized it wasn’t for her. She then enrolled at Fleming College in its welding techniques program. “Looking back on it, I am happy I made that choice when I did because I wouldn’t take my job as seriously as I do now.” She says her family and friends have always been behind her and have supported and encouraged her career choice.

She says without them she wouldn’t be where she is today. “I haven’t been in my trade very long (since 2012) but still to this day I have people doubting me or telling me that I can’t or should not be a welder. Having a great support system has been more than I could ever ask for.”

There is ample evidence, she says, that welding is still a male dominated trade. “There are still many men who are old school and don’t believe a woman should be in a shop or on a job site.”

She says the stereotypes are still the biggest obstacle to more women entering the trades and these will only change with time and more women proving these outdated ideas wrong. “Women in general have skills including patience, attention to detail and an ability to multi-task that are very valuable in this kind of work.”

Beyond these challenges, she says maintaining quality welds on a variety of different materials and in different positions can be difficult work. “I love what I do though. I get to use torches (I joke around and say play with fire) take a piece, or several pieces of steel, and put them together to make something bigger and better. I (am) beyond lucky to be able to work with my hands.”

McKendrick balances her time between work and continuing in trade school through UA Local 46 to earn her Red Seal. She has worked on a variety of projects including structural steel for farm projects and bridges.

Saying the possibilities are endless once she achieves her Red Seal, McKendrick is considering union membership and the opportunity to travel to work in the west.

She says she would absolutely recommend this as a career for anyone who has an interest, but also says welding isn’t for everyone. “If you like working with your hands, any trade is worth exploring. Just work hard, and stay humble.”

McKendrick is involved with KickAss Careers, a group focused on building awareness of careers in trades.