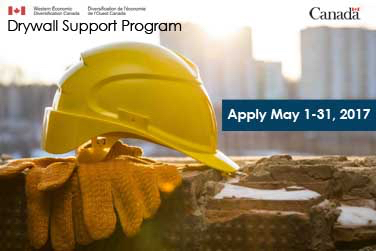 The decision to impose anti-dumping tariffs on US drywall has spurred an increase in manufacturing volume by CertainTeed Gypsum Canada, as contractors and Fort McMurray residents affected by significant price increases took advantage of remission opportunities through the federal government’s Drywall Support Program.

CertainTeed filed the anti-dumping complaint against U.S. dumped imports of drywall in Western Canada a bit more than a year ago “to establish fair competition for Canadian manufacturers and preserve Canadian jobs,” the company said in a news release.

On May 1, Western Economic Diversification Canada announced the Drywall Support Program. The program, which continues through May 31, provides relief to Western and Northern Canadian drywall contractors and builders as well as residents of the Regional Municipality of Wood Buffalo following the duties imposed on US imported drywall.

The program follows a lengthy legal process which saw Canadian International Trade Tribunal issue findings on Jan. 4, 2017 followed by recommendations on public interest issues and its statement of Reasons on Jan. 19. On Feb. 27, the Minister of Finance announced his decision on the public interest issues and issued the Gypsum Board Products Anti-Dumping Duty Remission Order.

The investigations, evaluations and findings of the CBSA and Canadian International Trade Tribunal for this complaint confirmed CertainTeed argument that there was significant US importer dumping at material dumping margins of 95 to 200 per cent which was injuring and threatening to domestic manufacturers.

“CertainTeed Gypsum Canada fully agrees with and supports the Minister’s announcement of relief measures to support the Western drywall industry’s transition to the duties,” said general manager Matt Walker. “We are especially pleased to see the measure to compensate users of drywall in the reconstruction of Fort McMurray after the terrible impact of the wildfires of last summer. We were the first to recommend a support program for Fort McMurray in October last year and are pleased to see this program help support those affected.”

As well, CertainTeed said in a statement that the company fully supports the federal government’s decision to assist Canadian contractors who are locked into long term contracts committed before September 2016. “CertainTeed informed all its customers that it had filed its anti-dumping complaint in early May 2016 and advised that customers inform themselves on the process and the potential implications,” the news release said

“CertainTeed has maintained a strong commitment to Canada since 1929, and is the only manufacturer to have kept all Western Canadian plants and operations open, while US companies have closed theirs following the financial crisis in 2008 and downturn in the US housing market and construction activity,” the company said. “However, the viability of these operations and the jobs at these Western Canadian plants has been under significant threat over the last few years resulting in down shifting and job losses, due to the injury from US importer drywall dumping.”

“Since the government’s ruling for the imposition of duties on US imports, we have increased hiring at our Western plants and re-established shifts which were cut over recent years due to domestic share loss,” Walker said.. “We are rebuilding our Western operations to return to sustained drywall production and are confident that over the coming months we will be able to increase domestic supply to meet customer demand.”

“During the case, CertainTeed Gypsum Canada appreciated the proactive and strong support of the Boilermakers Union. We are very happy that following the rulings of the case, we can now increase hiring at our Western plants for its members and re-establish shifts,” he said.

CertainTeed says it is the only remaining drywall manufacturer Western Canada. It has plants in Vancouver, Calgary and Winnipeg, and at two gypsum quarries in B.C. and Manitoba.