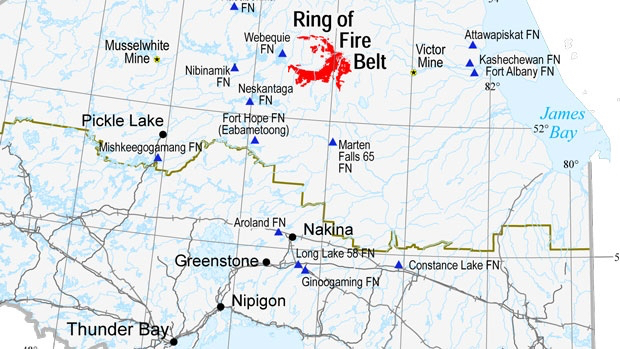 Engineers from China have recently visited the Ring of Fire in northern Ontario to assess the potential of building a $2-billion railway line, a proponent behind developing minerals in the area said recently, according to a Canadian Press report.

Frank Smeenk, CEO of Toronto-based mineral exploration company KWG Resources, said the rail line is crucial for the extraction of nickel, chromite, copper and platinum from the massive deposits.

He said a team of engineers from a subsidiary of the state-owned China Railway Construction Corp. surveyed a proposed 328-km. route in April as part of detailed engineering work before they advance toward a final investment decision.
“They had to visit the route, to see it with their own eyes.”

Smeenk said roads would also have to be built to construct the mine and railway.

Those roads would also link several remote northern communities, and they should be built, regardless of whether the mine proceeds, he said in the published report..

“I think we have an obligation to look after the First Nations, and if in doing that we can make the mineral deposit more accessible, then I think that’s a bonus, but we shouldn’t make one the hostage of the other,” said Smeenk.

Anticipation on development around the Ring of Fire, which was discovered in 2007 and sits about 500 kilometres northeast of Thunder Bay, Ont., has led to disappointment in the past.

U.S.-based Cliffs Natural Resources spent $550 million buying land in the area and proposed to spend $3.3 billion to develop the deposits plus $1.8 billion to build a chromite processing facility in Capreol, near Sudbury, Ont.

But as commodity prices worsened, Cliffs pulled out of the project, selling off its Ring of Fire property for $20 million (U.S.) in 2014.

Smeenk said the Cliffs exit has calmed down expectations and the pace of development, and the Ring of Fire is now moving ahead more sensibly.

“Things got less silly quite honestly after Cliffs threw in the towel.”

He said the Ring of Fire’s deposit of chromite is particularly attractive for China, whose vast steelmaking industry requires the mineral.

“The Chinese don’t have chromite and they produce 60 per cent of the world’s stainless steel, so it’s inevitable that we’re going to try and do business together,” said Smeenk.

Homebuilders relieved as government makes clear there will not be a...