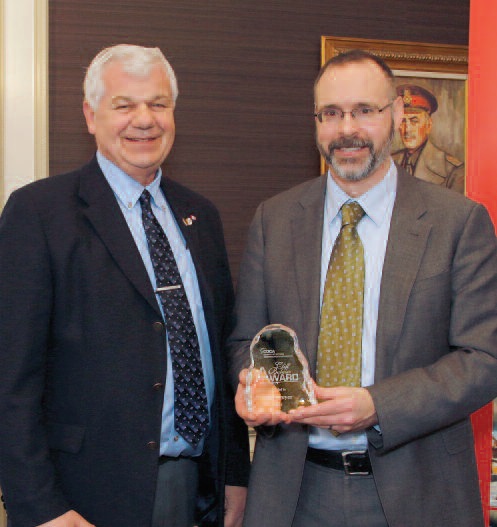 The Council of Ontario Construction Associations (COCA) recognized the contributions of industry leaders and associations at its annual general meeting in early March.

Lawyer Ted Dreyer received the Cliff Bulmar Award, presented “to the individual who has displayed an outstanding contribution to furthering the relationship between the construction industry and the Ontario government,” a COCA statement said.

Dreyer, a director with the Grand Valley Construction Association (GVCA), “effectively sought consensus on every point raised in the review’s two consultation documents and drafted COCA’s submissions on both the original consultation document and on the supplementary one,” said COCA chair Gary van Bolderen. “He also attended a meeting as part of a delegation from COCA with the reviewers and provided a summary of our views.”

Meanwhile, Michael Zachs, the director of the Office of the Employer Advisor at the Workplace Safety and Insurance Board (WSIB) was recognized with COCA’s Industry Ally Award, presented to an “individual or organization involved in a related industry, government department or agency whose efforts or assistance has aided COCA and the Ontario construction industry recognize improvements in the areas of standards, efficiencies or health and safety.”

“Michael willingly serves as a member of our WSIBOH& S Committee and is an important contributor to the affairs of the Ontario Business Coalition,” the COCA statement said. “His organization offers free seminars and webinars on a full range of WSIB matters. Michael is a huge resource for our industry. Nobody but nobody knows the WSIB better than Michael.”

Five leaders received COCA’s President’s Award for their outstanding contributions. They include:

• Harold Lindstrom, general manager of the Construction Association of Thunder Bay, who represents COCA on Infrastructure Ontario’s Real Estate Stakeholder Committee and is chair of the COO Committee and COCA’s plans room committee.

• Craig Moore, representing the Ontario Demolition Contractors Association on COCA’s board, also continues to serve on the association’s WSIB-OH&S Committee and the Construction Legislative Review Committee of the Provincial Labour-Management Health and Safety Committee.

• Paul Gunning, who joined COCA recently, is a member of COCA’s WSIB-OH&S Committee. “He was also an active member of our College of Trades Task Force and our Construction Lien Act Review Task Force. In addition, Paul represents COCA as a member of the Construction Legislative Review Committee,” said COCA president Ian Cunningham.

• Andy Palat has served on COCA’s Board of Directors for many years. “In our most serious deliberations, it’s always important not to jump to conclusions, not to make up our collective mind too hastily without taking all points of view into consideration,” Cunnigham said. “There’s a great danger when we all think alike. Some would call Andy a contrarian. I think he’s just doing a truly superior job as a responsible director, making sure that all sides of an issue are considered and debated fully and thoughtfully.”

COCA Chair’s awards recognizes volunteers whose contributions to the organization are well above and beyond expected performance for a volunteer. Winners this year included:

• Paul Seibel, president of ACL Steel, a member and past chair of the Grand Valley Construction Association and the current chair of the Ontario Division of the Canadian Institute of Steel Construction. “Paul was appointed by COCA to serve as the Ontario vice chair on the Board of Directors of the Canadian Construction Association in 2012 and he served in that capacity responsibly, thoughtfully and effectively for four years,” said COCA chair Gary van Bolderen.

• Steve Dietrich and Jim Coates from the London District Construction Association, “who championed the cause of membership in our provincial construction federation around the board table at the LDCA,” van Bolderen said.

• Don Gosen has served on the COCA Board of Directors for many years, including three years as its chair. “During his time as COCA’s ‘top dog’ Don made sure all voices were heard around COCA’s diverse board table in order for true consensus to emerge,” van Bolderen said. “Don’s intelligence and his polite approach serve as a model to bring out the best in us. Although he recently sold his electrical contracting business to four former employees, Don continues to work on a number of projects for Gosen Electric. In addition, he keeps himself busy with an ever expanding teaching role at Conestoga College, looking after his own portfolio of properties and serving on the Board of Governors of the Ontario College of Trades where he represents small non-union construction employers.” COCA also recognized the fortieth anniversary of two of its member associations, the Ontario Painting Contractors Association (OPCA) and the Reinforcing Steel Institute of Canada.