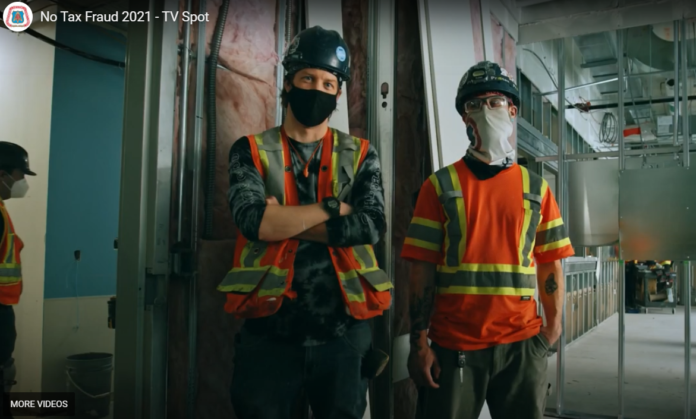 Imagine what we could build without tax fraud in the construction industry.

That’s the 2021 mantra for the Days of Action to stop tax fraud on construction sites, says the president of the Carpenters’ District Council of Ontario (CDCO).

It’s a more critical message than ever during the pandemic because the underground economy could destroy the public services needed to get people safely through this crisis.

The Ontario and Federal governments lose billions each year as a result of contractors operating in the underground economy. In fact, tax fraud revenue losses have increased 30 per cent over the last 10 years in the construction sector.

The annual No Tax Fraud campaign aims to stop the abuse.

While public events are not possible this year, carpenters and public officials are speaking out online about tax fraud which steals money from the government coffers and hurts all Canadians, especially during an emergency like COVID-19 when all levels of government are supporting the economy with record spending.

The annual campaign educates people about illegal worksites and urges them to contact representatives of all levels of government to shut down the underground economy.

Ontario’s unionized carpenters rally their colleagues across North America each year in April for Days of Action protests designed to raise awareness of tax fraud and the underground economy that is alive and well in the construction industry.

“This whole campaign is right on brand with us,” Yorke said. “We are organizing the unorganized, the little guy, the community and the next generation.”

The pandemic has exacerbated the problem as workers affected by job losses and cutbacks look for opportunities. Many are desperate for pay cheques and that sets the scene for employers to take advantage of the situation.

“It’s an incredibly precarious time for so many workers,” he said. “People need jobs and they are reaching out for whatever they can get and, unfortunately, there are employers willing to take advantage of that situation.”

On jobsites no-excuses safety and health is built into every course at our training centers. Our signatory contractors rely on that training to keep standards high and limit injuries so that our members can go home safe after every shift.

In contrast, on worksites run by crooked contractors, it’s often a different story.

“You can bet they do all they can to build unfair advantage into the job bidding process by doing the bare minimum (or nothing at all) to address pandemic safety.

During a global pandemic, that means construction workers left without workers’ compensation and unemployment insurance protections. Many struggle to get by on substandard wages, have their wages stolen by crooked contractors and labor brokers, and work without health insurance or retirement benefits.

“If the industry were operating as it should, without tax fraud, there would be more resources to address COVID-19,” Yorke said. “The underground economy in Ontario’s construction industry undermines the province’s fiscal position and hurts legitimate contractors. A study commissioned by the Ontario Construction Secretariat estimates that annual revenue losses due to underground activity increased by 30 per cent over the past decade.

Between 2013 and 2017, the provincial and federal governments lost between $1.8 billion and $3.1 billion annually as a result of contractors operating in the underground economy. In 2009 annual revenue losses were around $1.4 and $2.4 billion.

Yorke says the spirit of the Days of Action can’t be lost even though events are cancelled this year.

“We can still speak out, but we will have to reach our politicians directly,” he said, explaining the plan to involve municipal, provincial and national politicians to rally support and ask for swift action to shut down illegal sites and take money out of the underground economy.

“If we reduce tax fraud, we can ensure that the government has the money it needs to support Ontario and Canada through an emergency such as the one we find ourselves in right now,” Yorke said.

Organizers are asking individuals to call members of parliament and local municipal politicians to ask them to stand up to tax fraud.

“Once the coronavirus crisis is behind us, the roads will still have to be fixed, subways must be built, hospitals need to be built, and this infrastructure building will only be possible with tax money,” Yorke concluded.