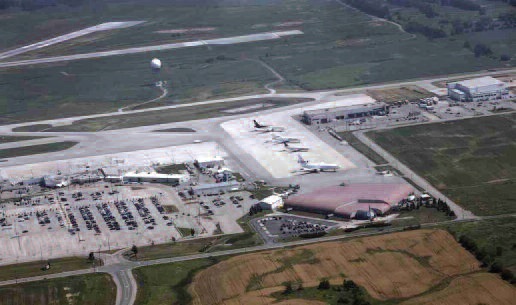 The City of Hamilton is home to nine business parks/districts which offer a wide variety of buildings for sale or lease and vacant parcels of land for future development opportunities. The newest is located in the southern portion of the City of Hamilton and includes the lands surrounding the John C. Munro Hamilton International Airport – now referred to as the Airport Employment Growth District or AEGD.

“The main message to the public is after 11 years, the AEGD is now finished,” said Councillor Lloyd Ferguson of Ward 12 in Ancaster, adding that these developments will eventually “mean a lot of new jobs and a lot of new tax revenue.”

The AEGD is close to 1,700 acres all together and includes both the Airport Business Park and the Airport Employment Growth District. Zoning is in place as are servicing master plans and funding. Guy Paparella, director, industrial parks and airport development, is leading the process.

As to where it currently stands, “in February 2015 the AEGD project received final government approval along with final configuration for the Airport Growth District and we’ve hired a company to develop an implementation strategy including a listing of all the capital projects to be funded and constructed over the next five years,” Paparella says.

“In the meantime we’ve had a lot of movement in the area with sales of land to companies looking to locate here. Our main issue is to ensure servicing is available. To date we’ve had two commercial subdivision proposals.”

The AEGD surrounds the John C. Munro Hamilton International Airport with land along Hwy 6 and the Glancaster Rd. area, as well as along Dickenson Rd. W. which “will be the main trunk so there’s a lot of interest,” says Paparella. “Because of the Province of Ontario’s growth figures (projecting another 50,000 jobs by 2041), we may need to expand to the other side of Hwy 6 out to Fiddlers Green Rd., right up to the Province of Ontario’s Green Belt boundary because it’s the only space left for the city.”

The City of Hamilton is also currently updating information on all business parks. “It’s a 40 to 50-year plan so it’s not going to happen overnight because other than around the steel plants, this will be our main employment growth area moving forward along with Red Hill Business Park which is filling up,” says Paparella. “We have to start targeting who we want to see in the area. We’ve got to make sure we move efficiently and effectively to create jobs and start creating more municipal assessment for the area.” REIN (Real Estate Investment Network of Canada) has repeatedly ranked Hamilton as the top location in which to invest in Ontario. “Known formerly as a hard working steel town, the city has quickly shed this image in the eyes of potential investors – as indicated by the record breaking building permit values Hamilton has experienced in recent years,” says REIN founding partner Don Campbell.

“We need to do this if we want to continue being one of the best places to invest and create jobs – instead of relying on thousands of residents commuting to Toronto,” says Hamilton city councillor Sam Merulla.

For more information on the AEGD and investment opportunities contact Guy Paparella by phone (905) 546-2424 ext. 5807, email Guy.Paparella@hamilton.ca, or visit www.investinhamilton.ca.