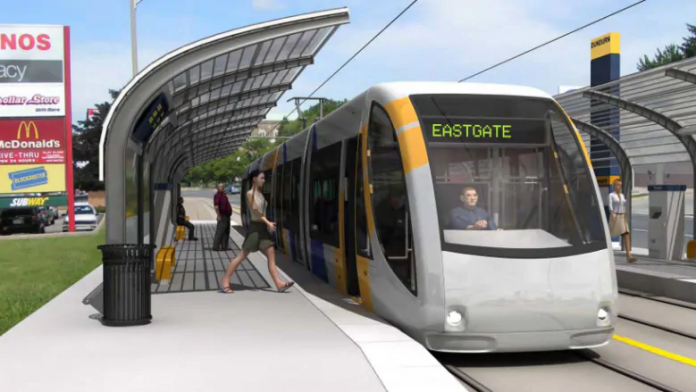 The provincial government’s decision to cancel the Hamilton Light Rail Transit (LRT) project is the “tip of the iceberg” of a serious problem with current Infrastructure Ontario (IO) project proposals – the excessive transfer of risks to consortia bidding on the projects – says Clive Thurston, president of the Ontario General Contractors Association (OGCA).

Thurston says he understands that at least one of participants among the finalists bidding on the decided to stop working on the project “when they saw where the costs were going” – and that the construction costs alone (let alone the ongoing operating costs) had reached a point where the project was no longer viable.

“There are two things driving costs right now,” Thurston said. “One of the lack of workers. We don’t have enough workers to do these jobs.”

“The second is the risk transfer is driving costs to the point that bidders are second-guessing their participation.”

Thurston said he has been able to confirm that the risk transfer problem isn’t exclusively with the Hamilton LRT project, which had other challenges – namely that there was no federal funding to help absorb costs.

“I was able to confirm this is the tip of the iceberg  (in that) at least four other projects that were under way/bidding have been extended or delayed repeatedly,” he said. He did not name the other projects.
Thurston says IO has designed the project specifications to “make us responsible for everything” and the only way the bidders can stay in the game is to increase their bids significantly to reflect their higher costs. “For example, they want to make us responsible for the rolling stock – that is not what we do.  If we have to take on the risks, the costs go up.”

He said there were earlier concerns about IO expecting contractors to “take responsibility for underground utilities.” This is problematic, because especially in older communities, “we don’t know where they are” and there can be many surprises – which need to be paid for, one way or another.”

Thurston said Metrolinx has agreed to take on the utility locates for future projects “which is a good sign” but unfortunately other risk transfer issues have been built into other IO projects.

In a statement, IO said it has notified the proponent teams of the project’s cancellation. “As per the Break Fee policy outlined in the Request for Proposals, teams will receive a stipend according to their involvement in the procurement process,” IO says. “IO and Metrolinx will be meeting with the teams in the coming days to discuss next steps.”

“Over the coming weeks, the province will work with the city to determine alternative opportunities to deliver on its $1 billion funding commitment to ensure the city gets the transportation that it needs.”

IO spokesperson Ian McConachie said the agency is committed to working with private sector stakeholders to minimize risk issues, especially where it can use public sector powers on matters such as land assemblies and utility locates.

“We are continually adjusting our processes as we work closely with the industry and stakeholders to improve our work as projects and the marketplace also evolves,” McConachie said.

The original project called for 14 km. of new dedicated lines, with 17 stops, and an operations, maintenance and storage facility. Construction was supposed to start imminently, with an estimated completion date of 2024. IO had intended to deliver the LRT project with the Alternative Financing and Procurement Design-Build-Finance-Operate-Maintain delivery model.

Toronto jumping at an “unprecedented opportunity” to ramp up construction projects...