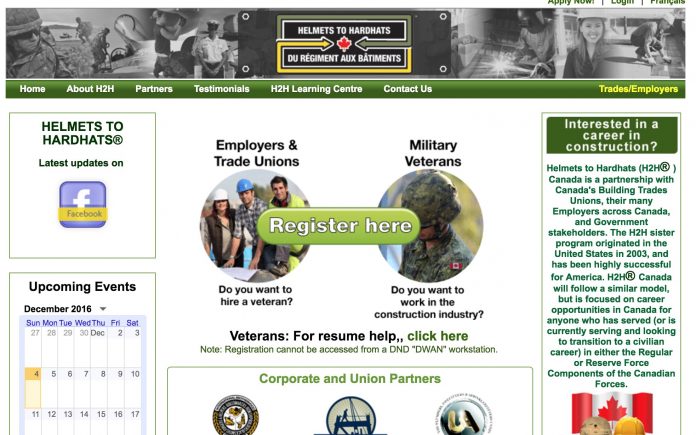 Established in Canada in 2007, Helmets to Hardhats (H2H) is expanding awareness across the country through new initiatives, expanded programs and outreach to support Canada’s military veterans, their spouses, and their offspring. The organization’s focus for 2017: A Canadian GI Bill.

Greg Matte, retired brigadier-general and H2H’s executive director, says the U.S. has had similar legislation since Franklin Roosevelt signed it into law in 1944. Its purpose is to assist anyone who served in the military with a subsidy to help upgrade their education or employment training so they can return to gainful and productive employment once they leave military service. Canada does not have equivalent legislation.

“We had an excellent program after WWII for a few years, and then a modified program was introduced after the Korean War,” says Matte. “Then came health care and unemployment insurance and the expansion of the general social safety net, thereby reducing the need for focused assistance for vets other than those injured in the line of duty. However, for the majority of vets who leave the military healthy and fit for a new career, there is little assistance for re-training or furthering one’s education. Not only do they not qualify for EI, since they’re considered to have left voluntarily, their situation was exacerbated by the discontinuation of severance pay, a change introduced under the Harper government.”

He says today veterans leave the military and must balance the challenge of finding and training for new work with that of supporting their families. Matte and H2H have been lobbying the federal government to legislate a new Canadian GI Bill, one that will provide both a subsidy for education and training so veterans can find their role within their new civilian lives, plus a living allowance so they can continue to support their families while they do so.

“In Ottawa alone there were more than 850 homeless veterans living on the streets. Many are too proud to ask for help and many simply accept this as their new fate. It isn’t right.”

Matte says Trudeau has already spoken about an interest in supporting veterans and he is hopeful that movement on a new Canadian GI Bill will happen in 2017. If H2H’s success with other initiatives is any predictor, that hope is likely to become reality.

Beginning in 2015, H2H turned its focus to the issue of commercial driver’s licences for veterans. “In the military, there is a strict protocol for training and testing, that allows military personnel to drive a number of vehicles, including large, commercial- class vehicles, on Canadian roadways. Once they leave the military however, that training and license was not recognized.”

The result was highly qualified veterans having to start from square one with training and licence wait times when they wanted to pursue careers as truck drivers or in fields that required higher commercial licences. Working with the Canadian Council of Motor Transport Administrators, H2H has been able to achieve recognition of a military licence with an equivalent commercial class in 12 of the 13 provincial and territorial licensing jurisdictions.

“Today a veteran with a high grade military vehicle licence can walk into virtually any motor vehicle office and on the spot, be granted an equivalent commercial grade licence to allow them to start working or seeking work immediately. Nunavut is the last jurisdiction to go and they’re actively working on it.”

In working to secure this, Matte and his team have been working closely with provincial governments across the country, along the way raising awareness about H2H, the building trade unions and their contractors who are supporters, and in general, for the opportunity trades provide. That effort could in turn shed light on another H2H initiative that has recently expanded: Teens to Trades.

Begun three years ago, Teens to Trades was initially a program focused on military reservists, often high school, college or university students who, through the program could be connected with unions and apprenticeships as a future career path. “Many of the building trade unions are very proud of their members who are veterans and, through a dedicated charter, actively support members who serve.”

Matte says this charter, applicable to all part-time military personnel, protects their role within the union if they are away for training or any kind of military duty. “Whatever service function they are called away for, they can return to their apprenticeship right where they left off. Or, they return with the same level of seniority they had when they left. They are not penalized for service.”

He says while some companies say they provide this same kind of support, here it is documented and adhered to. Teens to Trades is also intended to address an attrition challenge within the military reserves. Matte says more than 40 per cent of reservists leave within the first five years, often because they cannot find employment where they live and so must relocate, leaving their military careers behind. By connecting these young people with a means for a complementary career where they are, the hope is that they will both find the employment opportunity they seek, and have the opportunity to continue with their military career.

The Teens to Trades program was also expanded in 2016 to include dependent children of military veterans, aged 18 through 25. As a self-proclaimed military brat himself, Matte says he knows firsthand the challenges military children may face after a lifetime of upheaval and moving from school to school. Through Teens to Trades, these young people find a hub and spoke system that can direct and connect them with local unions and opportunities.

Matte says the opportunity the building trade unions provide to former vets is significant and immeasurable. “When veterans leave the military, they leave behind a support structure, a culture. The building trades union is a brotherhood that replicates this in many ways, providing them a secure and supportive space to begin their new civilian lives.”