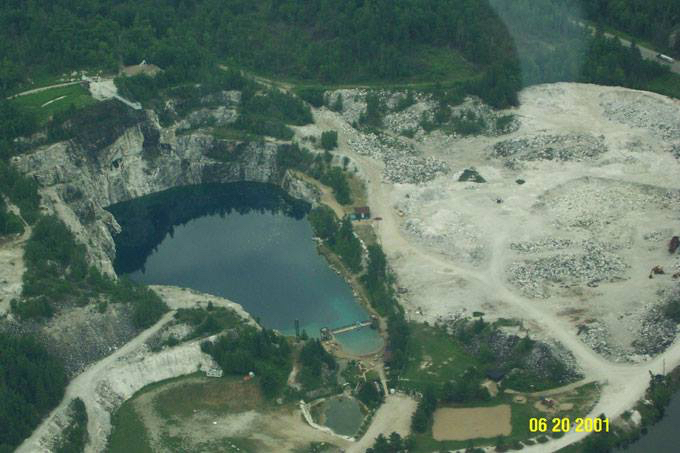 Moose Consortium Inc. (MOOSE: Mobilité Outaouais-Ottawa: Systèmes & Enterprises) says it has exchanged letters of intent with the president of Morrison’s Quarry, relating to development of a 200-acre property spanning the border of La Pêche and Chelsea, Québec.

The companies envision a $200 million commercial—residential—recreational development that would also serve as the northern terminus of MOOSE’s planned 400 km. metropolitan-scale passenger rail network.

“It’s era in stone and gravel production is coming to an end,” property owner Rudi Asseer said in a statement. “In recent years we’ve created one of the best recreational sites in the region, and we host the highest bungee jump in Canada. It’s now time to fully restore and revitalize this landscape into the most alluring place in the National Capital Region to live, work and visit.”

Asseer, who is also president of IMI Material Handling Logistics Inc., said: “We believe it makes both ecological and business sense for a multi-purpose project of this type to include passenger rail linkage with the region. We would love to see MOOSE restore train service to this property. This would benefit the entire region, and would play an important part in creating local high value jobs.”

MOOSE Consortium director general Joseph Potvin said that the railway developer has not yet issued its request for proposals for “Linked Localities” throughout the Greater National Capital Region. The company will begin station prioritization and selection to optimize return on investment in real property only after the current phase of planning is completed.

“But Morrison’s Quarry is different because this is the only practicable site for a full-scale terminus near the northern end of the line to La Pêche,” said Potvin. “No other location has room for the required daily train maintenance facilities, for new business expansion of significant scope, or for a park and ride large enough to support the surrounding area.”

The train may potentially still run four km. further north through the centre of Wakefield if there’s a successful bid for station development. But the last possible location for a full-service terminus near the intersection with Route 366 was permanently blocked in 2014 when a new elementary school was built directly on the railway corridor.

A development at Morrison’s Quarry will be significant to the NCC in other ways too. It is close to the Carman Road bridge over Highway 5, which means that train service to this location would bring regional transit to within 2 km of Brown Lake and Carman Lake in Gatineau Park.

“The upside is that finally public access to this mid-section of the Park will no longer be car-dependent, as it has been since the loss of regular passenger rail 50 years ago,” said Potvin. “Yet we acknowledge there are some issues to resolve. Properly managing increased use by hikers and cyclists will require very thoughtful planning and engagement with the NCC, CPAWS, Friends of Gatineau Park and various community interests. So we want to emphasize the importance of comprehensive public engagement, and of accommodating the insights of experienced planners.”

Before agreements are formalized with shareholders and investors this autumn, MOOSE Consortium is inviting public discussion through the First Nations organizations, the National Capital Commission, and with officials and stakeholder organizations in the municipalities of La Pêche, Chelsea and Gatineau.

“We hope to initiate discussions soon with organizations representing the First Nations, who hold aboriginal prerogative for this entire region”, Potvin said. “And we expect to advance specific discussions with the National Capital Commission”.

Public deliberations about this initiative will begin during the lead-up to the November 2017 municipal elections in Gatineau, Chelsea and La Pêche.

The planned development would generate considerable new municipal tax revenue. But there are some complicated local issues to work out with stakeholders. A 20 km. section of the required track is presently being dismantled by the Municipality of Chelsea, even as MOOSE is assembling $60 million in private investment to re-develop this particular section of railway.

MOOSE says its plan includes high-quality trail development for cyclists and pedestrians that will enhance public safety and community lifestyle. The company’s ‘Rails-WITH-Trails’ design removes the inclination for people to walk on the tracks, and it provides access for incident response where roads are not present, the company statement said.

Disputes and unresolved lien claims only some of the issues affecting...