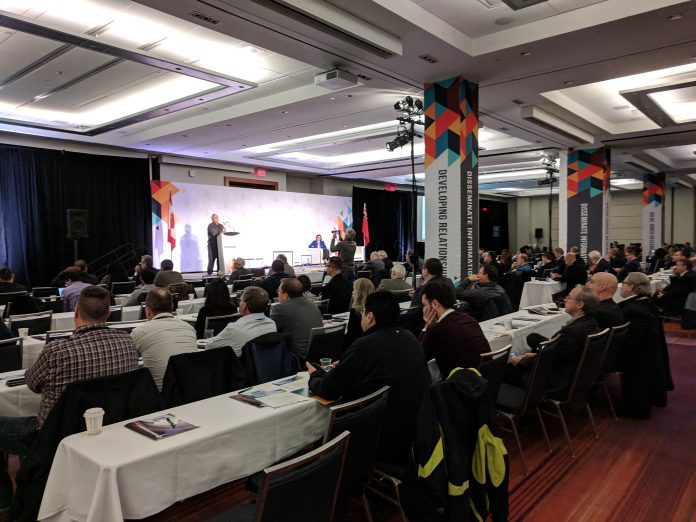 The great majority of Ontario contractors expect business will improve or at least remain the same this year compared to 2018, with only 17 per cent expecting a decline in work volume, the Ontario Construction Secretariat (OCS) reports in its 2019 Contractor Survey.

The survey shows the most optimism in eastern and southwestern Ontario, while across the province 33 per cent of industrial, commercial and institutional (ICI) contractors forecast they will be busier in 2019 than they were last year and just under half of contractors expect to conduct the same amount of work as they did in 2018.

The OCS released the survey at its 19th annual State of the Industry and Outlook Conference in Toronto on March 7.

“In general, the outlook for the ICI construction industry is good,” said OCS chief executive officer Robert Bronk. “After a busy 2018, contractors anticipate the coming year to be positive, with a similar level of optimism that they had at this time last year.”

Not surprisingly, labour market issues topped the list of challenges facing the ICI construction industry, with recruitment of skilled workers (72 per cent) and an aging workforce (50 per cent) amongst contractors’ greatest concerns. Other challenges that are on contractors’ minds are the provincial political environment, rated as a significant concern by 34 per cent of contractors, along with keeping up with new technologies and changes to NAFTA/USMCA (both 30 per cent).

When asked to forecast, more than two-thirds of contractors said that they are expecting it to be more difficult to access skilled labour in 2019 compared to last year. Among the potential solutions, the most likely to be adopted by contractors in the coming years include deploying workers more efficiently, using new technologies, hiring more apprentices, and raising wages.

“We understand the impact of the skills shortage on the construction economy in Ontario, especially the impact it has on the growth of firms,” said OCS research director Katherine Jacobs. Meanwhile, Bob Collins, BuildForce’s lead economist said: “The construction and maintenance industry will need to hire, train, and retain almost 103,900 additional workers over the coming decade.”

Doug Porter, chief economist and managing director, BMO Financial Group, reviewed the economy – observing the sharp decline in markets at the end of 2018 and the equally rapid rebound in the early months of this year.

“While the Ontario economy faces a number of challenges in the coming year, we expect it to grind out moderate gains and potentially even lead the provincial growth tables in 2019, underpinned by strong population gains, reduced trade uncertainty and infrastructure spending,” he said.

Ontario’s infrastructure minister Monte McNaughton attended the event, significant because OCS represents the interests of unionized contractors and the major construction trade unions, which have faced a political revolution with the transition from the Liberal/NDP alliance to the current Progressive Conservative government.

McNaughton said the government’s priority is creating and protecting good jobs, and he appreciates OCS’s role in encouraging harmony in the construction industry.

He said the government has budget challenges with the previous government’s debt legacy – “spending $40 million more per day than they were taking in” and leaving the province with a $347 million debt.”

“We will not let our province be consumed by debt,” McNaughton said. “We are going to balance the budget in a very responsible manner.”

That said, the government plans to continue its infrastructure investments, with a “project pipeline (that) is among the busiest in the world.”

“Infrastructure Ontario (IO) has 25 P3 projects worth 18 billion under construction,” he said. “Seven projects worth 12 billion are in the planning stages – with many more to come at truly historic levels.”

Other speakers included Nik Nanos, executive chairman, Nanos Research Group of Companies, who outlined the trend towards political populism fueled in part by social media and fake news, and what he described as “voter rage” caused by the struggle of ordinary people to improve their lives.

John Casola and Charles Todd explained the story behind the Canada Infrastructure Bank and Tom MiddleBrook from Dragados Canada explained the progress in building the Gordie Howe International Bridge to improve connections in the busiest Canada/US trade corridor between Windsor and Detroit.