Ontario has introduced the long-awaited new Construction Act that will reshape industry practices, with new prompt payment rules, an industry-specific adjudication system and an updating of the current Construction Lien Act.

Attorney General Yasir Naqvi introduced the legislation on May 31, culminating years of lobbying by trade contractors for prompt payment legislation, and an extensive review of the existing law – leading to the implementation of almost 100 recommendations – by attorneys Bruce Reynolds and Sharon Vogel.

The legislation still needs to go through Legislative Assembly readings and committee review, and there will be further input and possible amendments before it is promulgated. Naqvi has said the government’s goal is to have the legislation enacted by the end of the year.

“Our proposed reforms are the biggest changes to Ontario’s construction industry in over 30 years,” he said at a legislative reception after Bill 142 was introduced. “If passed, they would reflect the current needs of the industry . . . and support the thousands of people who work in it.”

The changes and provisions include: 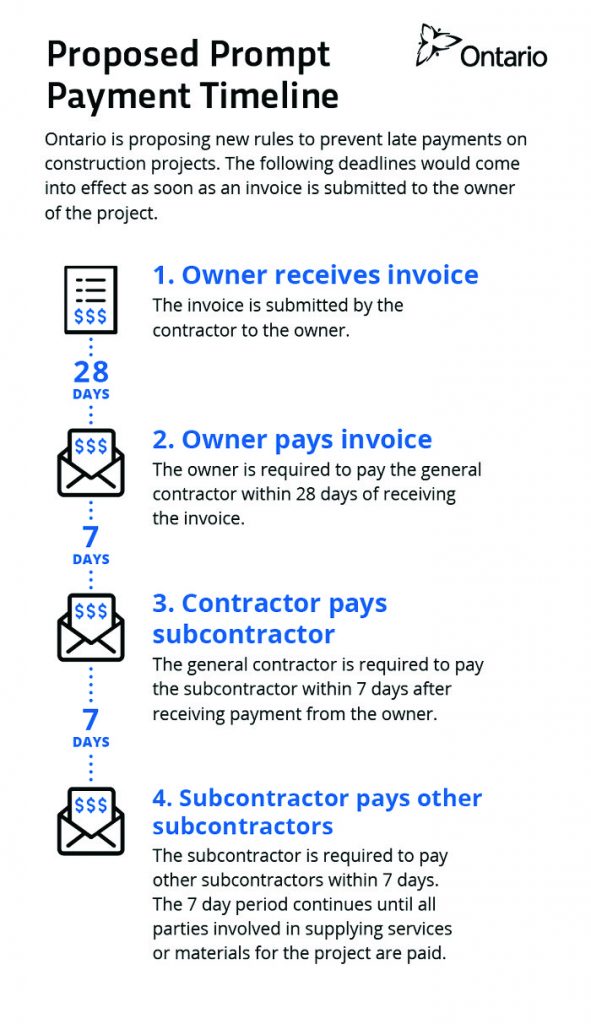 One provision in the new law removes wording that makes mandatory anyone posting the required Certificate of Substantial Performance to advertise this news only in the Daily Commercial News. The wording in the existing Construction Lien Act is so specific that the only place anyone can advertise these notices is in that publication.

A government spokesperson said the changes were made to reflect the changing technology. “Repealing this provision and providing for regulations will allow the government to update publication options to ensure that there is universal access to the information,” the spokesperson said in a statement. “The Ministry of the Attorney General will work with the construction law experts and the Advisory Group to develop these regulations.”

In a news release Prompt Payment Ontario (PPO) described the legislation as “a ground breaking step in the right direction (that) will help protect over 400,000 workers across the province.”

“Ontario is the first province in Canada to introduce prompt payment legislation – leading the way for other provinces across the country and the federal government to do the same.”

“We are happy to see the government is doing the right thing to solve this problem, PPO director Ron Johnson said. “Prompt Payment Ontario, and our wide-reaching membership, are hopeful that the government will stay true to their commitment and pass this important legislation in the fall of 2017.”