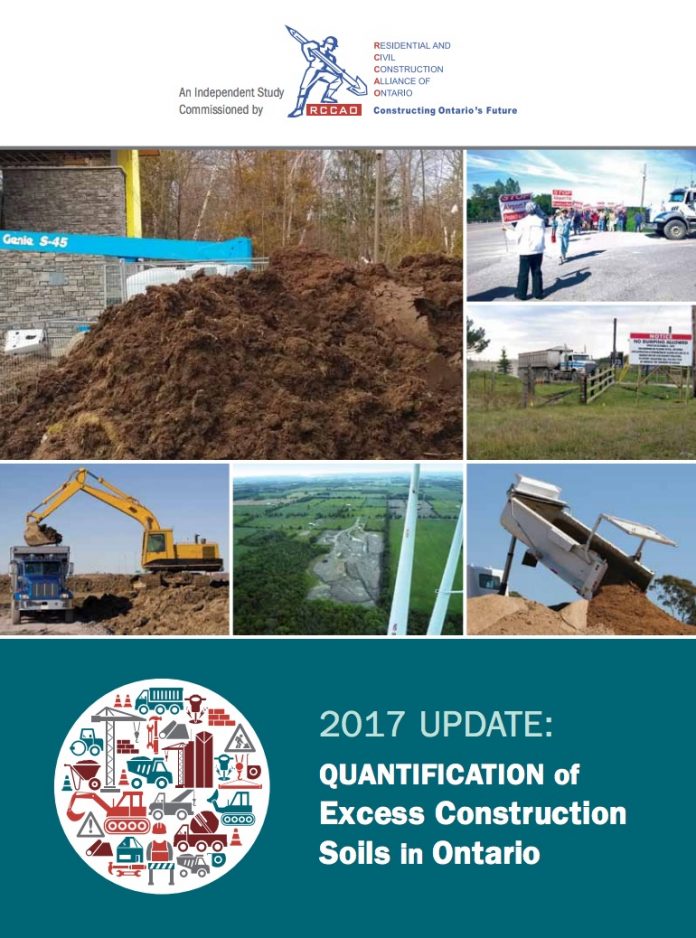 Ontario’s robust construction activity generated enough excess soil in one year to fill 16 Rogers Centres in Toronto, according to a report released April 26 by the Residential and Civil Construction Alliance of Ontario (RCCAO).

In the 2017 Update: Quantification of Excess Construction Soils in Ontario, report author Frank Zechner estimates that 25.8 million cubic metres of excess construction soil was produced in 2015 from municipal infrastructure, residential and ICI (industrial, commercial and institutional) projects. Particularly in the hot GTA market, excess construction soils are sent by hundreds of thousands of truckloads to landfills and other disposal sites in rural areas.

So, why is this important?

“Movement of soil is a pressing issue across Ontario and you can’t create effective management tools without knowing the quantity and quality of the soils being generated,” says Zechner, an environmental lawyer and engineer. “The province does not collect data or track excess soil volumes from infrastructure and development activity. This research helps to fill that void. These are primarily clean soils and can be reused on-site or at another construction project with proper planning.”

RCCAO asked Zechner to update his 2012 report on excess soil. Based on estimates for 2010 of 20 to 24.6 million cubic metres, the amount of excess soil being generated has risen.

Along with other organizations, RCCAO has worked in consultation with the Ministry of the Environment and Climate Change (MOECC) for years to promote best management practices (BMP). Currently, efforts are being made to implement an Excess Soil Management Policy Framework.

Andy Manahan, executive director of RCCAO, adds: “A lot of excess construction soil is disposed of when it is actually a valuable resource. We would like to see municipalities use BMP wording in tender and soil by-law documents. Our main objective is to reduce the current ‘dig and dump’ approach as this results in a range of negative consequences.”

RCCAO has advocated approaches used by a U.K. organization to beneficially reuse excess soil. Adopting this model in the form of a “Soils Ontario” group would limit the need to send construction soil to landfill. This would have several benefits, including the reduction of fuel and truck emissions. RCCAO’s proposal would also encompass a soil-tracking system and a website soil-matching registry.