Three construction teams have been qualified to compete for the second stage of the Ottawa Light Rail Transit (LRT) project, which received a boost on June 16 when the federal government formally committed as much as a $1.09 billion for the overall $3.5 billion initiative.

The finalist names are expected to be announced within weeks. Then the O-Train planning office, led by Chris Swail, will bring the project to the award stage with a report to Ottawa city council.

The contractor for the first stage, Rideau Transit Group, (RTC) won’t be one of the shortlisted Stage 2 bidders, since it agreed to a $492-million contract with the city to maintain the LRT line, provide communication equipment, expand the maintenance yard and supply 38 more Alstrom LRT trains.

The overall construction project includes rail extensions east and west, as well as an expansion of the first stage Trillium Line to Riverside South and the airport, as well as widening Highway 417 between Highway 416 and Maitland Ave.

There will be 38 kilometres of new rail built beginning in 2018. Trillium Line extensions (which RTG can bid on) to the airport and Bowesville Rd. In Riverside South are planned to open in 2021. Then the eastern LRT to Trim Rd. will be completed by 2022 and the western extensions to Moodie Dr. and Algonquin College will be ready by 2013.

The costs of the core LRT and Trillium Line will be shared equally by the municipal, provincial and federal governments. The province and feds will split extra costs for the $315 million rail extensions to Trim Rd. and the airport.

The federal government has already committed more than $67 million for Stage 2 planning through the first phase of the Public Transit Infrastructure Fund last year.

The current O-Train construction and planning offices will continue to function as they do today. The O-Train construction office, led by Steve Cripps, will oversee the activities associated with the final phase of construction of Stage I and the final steps of testing and commissioning leading to full revenue service, Manconi’s memo said. The O-Train planning office, led by Swail, will oversee the procurement of Stage II of the city’s LRT program and will bring the project to the award stage with a report to council, he wrote.

As well, as the city gears up for the second stage, environmental assessments and planning are underway for a third-stage extension to Kanata, with a notice outlined here:

This Planning and EA Study will define a corridor for the future expansion of the city’s LRT network to Kanata. Extending LRT to Kanata is identified in the Ultimate Network in the city’s 2013 Transportation Master Plan (TMP). 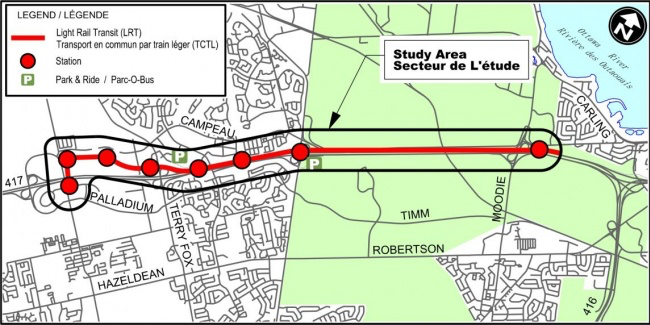 You are encouraged to participate in the study by attending consultation events or by directly contacting the study team with information, comments or questions. Updated project information will be posted periodically on the study’s website.