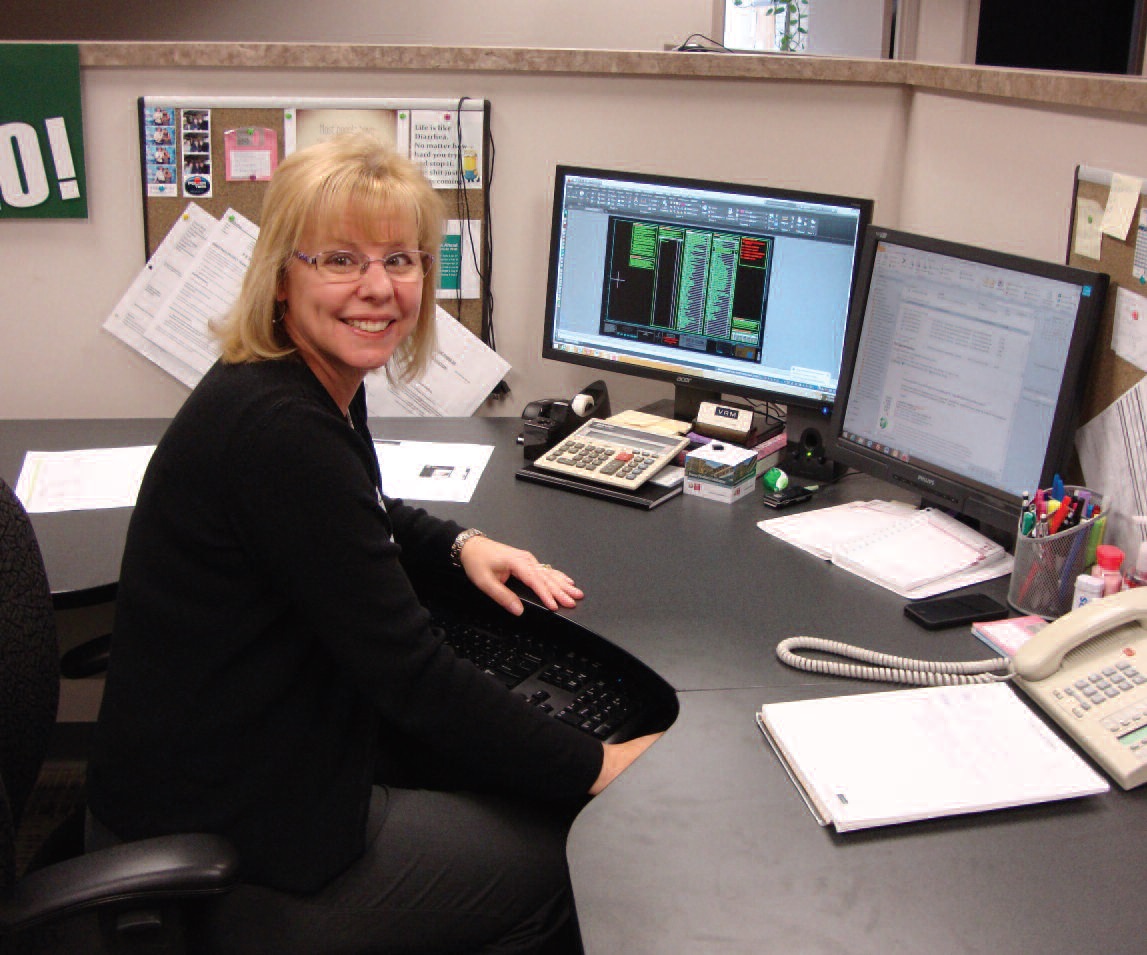 Inspired by a high school teacher who recognized her conscientious nature, Patti DeLange has spent her entire 25-year career with structural, civil, mechanical and electrical consulting engineering design firm Vanderwesten Rutherford Mantecon (VRM). Here she has learned from mentors, diversified her skill set and risen to the role of senior electrical designer.

DeLange says after her first drafting course in grade nine, she decided to actively pursue a career in the construction industry. Supported by her family who, she says, believe everyone should pursue their passion, she went on to study in Fanshawe College’s architectural technician program.

DeLange vividly recalls the strange looks from contractors and other construction industry tradespeople that greeted her when she walked onto a job site early in her career. While being a woman in the construction industry was unique in the early 90’s, “my co-workers have always been very supportive and encouraging. Over time my knowledge and skill broke down any perceived barriers or gender biases.”

Some of her first tasks involved working on corrections to drawings, but she quickly ascended to inputting panel and fixture schedules. Her need for continuous challenge pushed her to work on her own drawings for smaller projects. “I had mentors who helped me understand any mistakes or potential risks and taught me to reference electrical safety and the Ontario Building Code. I learned at every step in the process.”

As senior designer, she is pleased to now provide that same mentorship to the younger staff at VRM. Today, she works on large projects, completing calculations to determine service size, working with hydro services, and designing every electrical system from the transformer and beyond. “

As I grew in my career and as the industry evolved, the work moved away from hand drawings to more computer based applications. That has presented learning challenges beyond the changing industry.” These changes and challenges are still present today as DeLange is developing her REVIT and building imaging modelling skills.

DeLange says she enjoys these kinds of challenges, as well as ones from bigger projects. She has been involved with several key projects including the Upper Thames River Conservation Authority, (for which VRM received an ASHRAE award for sustainability), St. Joseph’s Hospital and several buildings at Western University. “No two buildings are ever the same and no two days are ever the same. It is very satisfying to see projects move from ideas to completed buildings and knowing the crucial role we played in creating them.”

DeLange says she has never been concerned about balancing her family and career. She took time off to have a child and came back to work without issue. “I also help my husband with accounting for his business and I am involved in Women in Construction with the London and District Construction Association (LDCA).”

She believes there are many roles women can manage at the same time, as evidenced by her past roles with the LDCA planning committee, and her ongoing work raising funds for scholarships the association provides to young women in trades education.

“The association supports women in the trades of all ages and at all stages,” she said. “At one time there might have been one or two female students in related programs being taught by primarily male instructors. Now the numbers of female students are higher and we’re seeing more women taking on those instructor roles as well.”

She continues to grow in knowledge and expertise. By the end of 2016 she has set several goals for herself: to have completed her lighting consultant certification and receive the CET (Certified Electrical Technician) with OACETT (Ontario Association of Certified Engineering Technicians and Technologists).

Her ongoing push to excel is reflected in her advice to young people considering a career in the field. “If you want to do some thing, don’t let anyone talk you out of it. If you work hard, do your job and keep working to improve, advancement will come.”