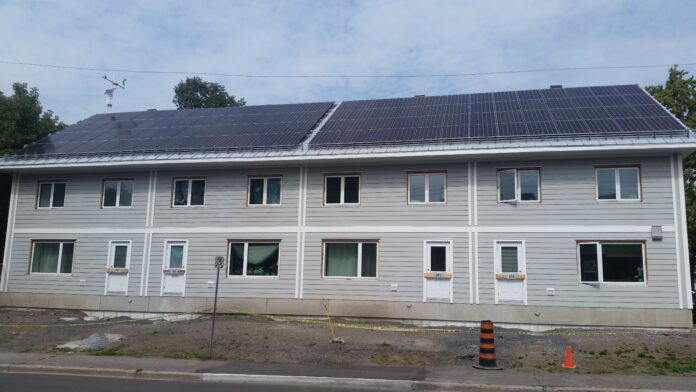 Bringing innovation and conservation together, a small row house project in Ottawa is demonstrating how easy it is to bring 60-year-old stock into the 21st century, saving its owner more than half a million dollars in operating costs over the life of the building.

“This is the first panellised net zero in Canada,” says Daniel Dicaire, manager of conservation and sustainability for Ottawa Community Housing.

The Presland PEER project is a deep-energy retrofit of a four unit, two-storey row house project built in the early 1960s which will now operate at net-zero energy performance.

“We are going to reap the energy savings benefits which pay back on the original project,” says Dicaire, “and we get excellent benefits for our tenants for indoor air quality and comfort.”

Located in Ottawa’s east-end on Presland Road, the existing units were reaching their life-cycle tipping point and showing their age. There was evidence of water ingress through cladding and roofing, deteriorated floor framing, spalling brick and water infiltration in basements; and, there was significant heat loss.

“You get to the point where a lot of these units are at and we need to make investments to ensure their longevity,” says Dicaire. “There is a cost of doing nothing, and there are huge savings related to deep energy retrofits.

Dicaire conducted a total cost of building ownership analysis in order to look at the operating costs over the life of the investment. “That annual operating cost doesn’t usually get factored in,” he says.

“We put that cost at $2.5 million over next 60 years. That is a real cost,” he says. “If we have an opportunity to front load those costs, it saves us over half a million dollars over the 60 year time frame. Then we get to pay ourselves in savings over the next 60 years.”

Work on the project began in spring of 2020 with construction of the prefabrication workshop and concluded in August 2021 with final landscaping of the exterior.

The company’s in-house construction manager hired and trained its own carpenters. They fabricated a table that moves around to be able to cut the big square cuts in the panel. No robotics needed.

“With a little bit of innovation you can do it,” says Dicaire. “You get better quality control and you are actually able to produce these panels with a more typical labour force.”

The OCH construction team built 24 nine-feet by 20-foot panels to create the new building envelope. The panels were installed with the residents in place, eliminating the costs and discomfort of temporary relocation.

According to Natural Resources Canada (NRCan), exterior walls can account for 25-35% of heat lost in the typical existing home.

Along with the new building envelope, the project includes a new roof with air-tight attics and new high-performing fibre glass windows.

A bank of 35-kilowatt solar panels will produce over 40,000 kilowatt hours annually, just a bit more than the four homes use each year. The old natural gas furnaces and the gas-fired domestic hot water tanks were removed and replaced with electric. The new electric heat pump furnace provides heating and cooling using the existing ducts.

Active heat recovery ventilators provide natural ventilation, while using the air that is exhausting to preheat the incoming air.

“One of the major goals of this project is to improve the comfort of our tenants,” says Dicaire. Ottawa Community Housing provides approximately 15,000 homes to about 32,000 tenants. They intend to replicate this project throughout their portfolio.

In addition to improved air quality, tenants will now having air conditioning in the summer, where they did not have that before.

The Presland PEER project is a pilot and partnership with NRCan consisting of funding and a research project. A $547,500 investment from NRCan’s Green Infrastructure – Energy Efficient Buildings Program was matched by OCH, for a project total of just over $1 million.

CanmetENERGY-Ottawa, NRCan’s research centre in Ontario, is collaborating with OCH to monitor the performance of the retrofit, as well as providing ongoing research on PEER.

“To ensure that everything is performing as intended, our plan is to do periodic reporting and analysis,” says Dicaire.

“We are really trying to share our lessons as much as possible,” says Dicaire. Both OCH and NRCan are publishing case studies and performance reports. OCH recently released a video on the project, featuring time lapse construction footage.

Dicaire says in order to meet the world GHG emissions reduction target, “we need people in the industry, especially in the private sector.”

“And by the way, there is a huge market for this,” he says.

According to NRCan, recent initiatives in Europe indicate that prefabricated exterior retrofits offer a significant new market in Canada. More than two-thirds of the 14.5 million dwellings in Canada were built before the existence of residential energy efficiency standards. Dwellings account for close to 14% of Canada’s energy-related GHG emissions and more than one sixth of national energy use.

“I hope this lights a fire under the private sector,” says Dicaire. “We need the contractors and consultants to come to the table and help us make this a reality.”