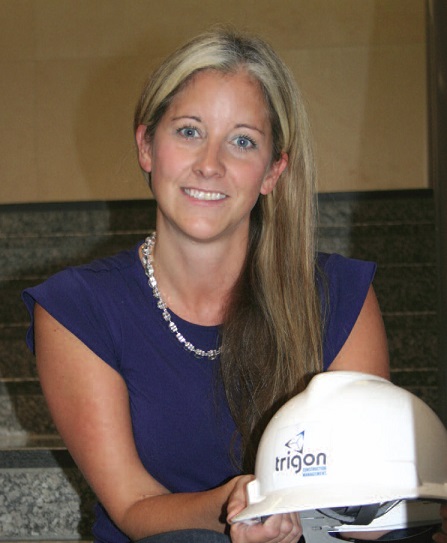 The key to success for Renae Redford, Trigon Construction senior project manager, wife and mother of three, is her ability to find balance between her private and professional
life. Currently, Redford specializes in building corporate office interiors.
Sought after for her strong and positive personality, she is quick to credit her professional
success to a simple approach, “Know your craft and respect the expertise of your peers and trades – you don’t have to roar to be successful.”
Real or imagined barriers for women in the construction industry, she says, have not
defined or limited her.

The fourth of eight children and the sister of six brothers, Redford says she was never destined to be a wallflower. Her father additionally owns his own construction company and builds custom homes and cottages. This, she says, is where she truly fell in love with the trade.
She recalls early years on site problem solving unexpected project challenges. Her attention to detail and ability to provide creative solutions made her an invaluable
member of the family team.
Redford graduated from Ryerson University with a degree in Architectural Science. While initially she thought she would design, her forte became project management. Although she loved the family business, she says she craved greater challenge and so struck out on her own.
Understanding the value of a broad knowledge-base, Redford began her career in estimating. Eventually, she made her way to Trigon where she believes family and career are equally valued. She says when her children were younger she recognized she wanted and needed to have flexibility in her schedule, to work from home some days and to be able to end earlier on others. She chose to leave a larger firm for Trigon because it offers this flexibility in providing work environments that ensure the continuing growth and development of its employees.
Redford is currently heading up her most prestigious assignment to date – managing
and completing 420,000 sq. ft. of corporate tenant space in the Toronto financial sector.
Saying she has never felt gender bound, Redford says there are advantages to being
a woman. “I approach things differently than others may.”
She says understands the importance of being fair and reasonable and establishing and maintaining strong client relationships throughout the project. She maintains it is an asset “to have women at the table for not only the way they approach the job differently but for how they deal with all partners and parties including clients, trades and internal staff.”
Redford says she would absolutely recommend construction as a career for women and can see her own daughter both enjoying and being skilled in it.
“It’s important for women to feel comfortable in their own skin and to never feel inferior. People – whether male or female – will call you out if you don’t know your stuff. So, know your trade, surround yourself with great mentors and most of all have confidence in what you do and you will
succeed. This is a booming industry, making it a solid career path no matter your gender.”