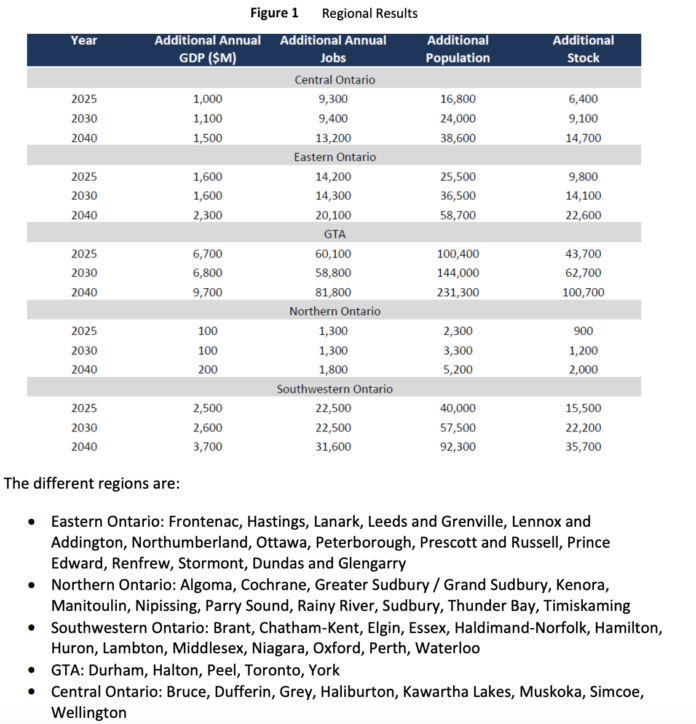 A report recently released by the Residential Construction Council of Ontario (RESCON) concludes that individual regions across the province would benefit from speeding up the development approvals process and backs the case for a harmonized e-permitting system.

The report, done by the Canadian Centre for Economic Analysis, suggests that reducing the process by six months, combined with a 10-per-cent increase in investment, would pay huge dividends for individual regions.

“This analysis shows that individual regions in Ontario would see significant economic growth and job opportunities if the development approvals process was reduced,” says RESCON president Richard Lyall. “Figures in the report clearly highlight the value of having a standardized and digitized e-permitting process to speed up the process, as it will boost employment, result in thousands of additional units of much-needed housing, and billions of dollars in investment for communities.”

The report, Impacts of Streamlining Construction Approval Processes in Ontario, a Socioeconomic Analysis, forecasts that if the process was speeded up by six months the GTA alone could see an additional 60,100 jobs and 43,700 more housing units over the next five years, and $6.7 billion in added annual GDP. Over a 20-year period, the GTA would see 81,800 additional jobs, 100,700 more housing units, and $9.7 billion in added annual GDP. The same scenario would play out in other regions

The report is a follow-up to an earlier analysis that looked at impacts of a speeded-up system province-wide.

Additional housing stock can play a key role in meeting the provincial population growth targets and could serve to reduce housing affordability pressures by increasing supply of stock relative to demand. Housing, like many other infrastructure and capital investments, also facilitates ongoing economic activity even after it is constructed, such as rent, utilities, maintenance, or renovations.

RESCON and other industry stakeholders have joined a One Ontario initiative that is developing guidelines for a digital e-permitting system that could be adopted for the 444 municipalities in Ontario. The current approval processes are too slow and guidelines can vary from region to region. An earlier report done by RESCON recommended that municipalities move out of the world of pen and paper and adopt an interconnected, digital e-permitting platform.

“Regions across the province would reap big rewards if Ontario had a streamlined e-permitting system,” says Lyall. “Speeding up approval times for builders can result in significant benefits in the short term, while setting the stage for greater long-term benefits by attracting higher levels of investment.”