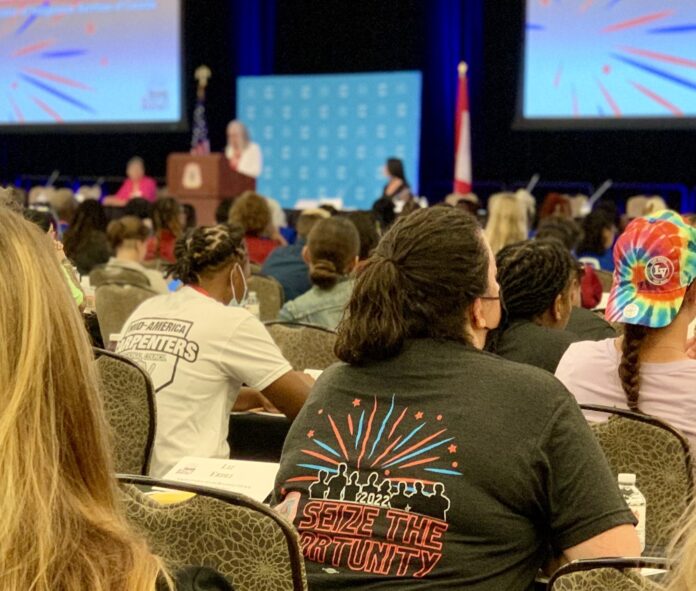 There was no shortage of pressing issues to be grappled with by the more than 500 female union leaders who attended the 2022 International Sisters in the Brotherhood conference held in Las Vegas  Aug. 4 – 7.

There were “many discussions around childcare and elder care, recruitment and retention of women in trades, leadership opportunities and political involvement,” added McDonald who was among a group from all over Canada and the United States who for the past few months had been meeting virtually to plan the events that culminated in the conference.

The last conference was held in 2018 when the theme was “It’s Time.” Since then, so much has happened in building trades, in industry and in the world.

“When considering themes, the common narrative in the preliminary meetings was that we needed women in our organization to seize opportunities that were being presented,” McDonald said. Hence this year’s theme, “Seize the Opportunity” – whether it be running a job site, being at the forefront of an activist movement or caring for a family.

Registration, workshops, caucuses and  breakout sessions were all planned and operated by the union sisters in attendance including 87 from Canada and 31 representing the Carpenters District Council of Ontario in trades ranging from general carpenter to interior systems specialists and healthcare representatives.

McDonald said the conference helped narrow the UBC focus to guide the half million-member international union and its female leadership going forward on strategic priorities in areas where “we can have the greatest impact:”

The conference featured an impressive guest speaker lineup that included Vernice “Fly Girl” Armour, the U.S. Marine Corp.’s first female combat aviator and Minister of Indigenous Services Patty Hajdu, who was able to have lunch with the Canadians attending.

“We discussed barriers women face in the trades, improving access to flexible childcare and fair treatment in the workplace,” the minister said.

“Events like the Sisters in the Brotherhood conference are a great way for women to not only network and support each other – but also a great way to share what each other are doing from one region to the next, what works, and what doesn’t,” added Kayla Bailey, a journeyperson steamfitter and welder with United Association Local 46 in Toronto.

While slow progress is being reported in making construction  work sites more appealing to women, the most recent Statistics Canada Labour Force Survey shows they still only account for less than 13 per cent of a growing national construction workforce, and are still in the low single digits on site.

Women continue to face harassment, a lack of recognition and a paternalistic attitude on the job and “there are changes that are needed to shift the industry culture,” Bailey said in an email. “Change is already underway – and much of that leadership is coming from tradeswomen and other folks that have been historically underrepresented.”