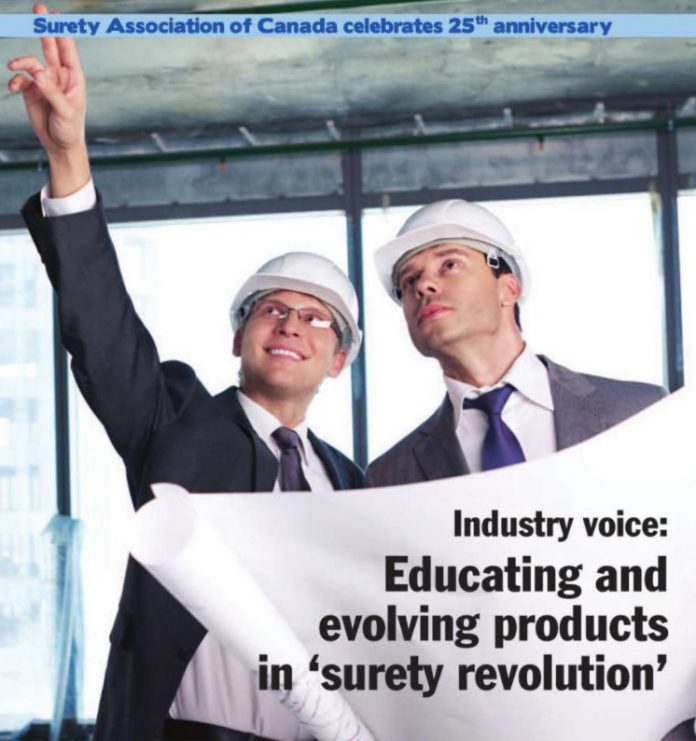 The Surety Association of Canada (SAC) was formed in 1992 by a small group of companies that sought independence and representation that was distinct from the insurance industry. Today member firms represent more than 90 per cent of all surety premiums written in Canada.

The association acts as the national, provincial and regional voice for the industry and, as it marks its 25th anniversary, it continues to educate and act as a resource not only for its members, but also external stakeholders across the country. It also develops products and services to better serve the industry.

SAC’s creation goes back to a group known as the ‘gang of five’, a group of five individuals frustrated that the interests of surety were represented by the insurance industry, an industry that couldn’t fully comprehend the uniqueness of the surety relationship, or the product. Steve Ness, SAC’s current president, belonged to the original group.

“Surety involves a complex relationship structure,” Ness says. “On one hand, we have the relationship of one kind with the contractor we bond as the guarantor of their work. The beneficiary of the bond however, is the owner and that is also the organization that makes the decision to include a bond as part of the project.”

SAC: Achievements over time — A look at the association’s accomplishments in the past 25 years.

He went on to explain that this means the project owners are the real clients of surety bonds, even though the bonding company has no direct relationship with them. “As an association, part of the job is knowing where to target education and promotional efforts and that was something that wasn’t being properly focused on.”

Resigning from their roles at the time, the five sat down to create a vision for what a new association would be, how it would function, and how it could meet the interests of members, and the industry. “We wrote a letter and sent it to all of the surety companies at the time, thinking perhaps half would be interested in joining the new association. We got 100 per cent uptake.”Two years later, with organization and negotiations complete, SAC held its inaugural meeting. Robert Taylor was elected chair of the 10-member board of directors and Bruce C. Gordon took the helm as the association’s first president.

More than a voice

While SAC, like many other associations, acts as the voice of its members, SAC goes beyond that, acting as an educator and helping develop product to make the industry stronger. Saskia Martini-Wong, director of membership and stakeholder services, says these roles are among the association’s key focuses.

“We have a tender alert program through which we will contact project owners on behalf of our membership to clarify the language they are proposing to ensure it makes sense,” she says.

This involves educating project owners, often for public sector projects, on what a surety bond does and doesn’t do. It also involves providing more accurate information on specific needs so owners can make the best decisions regarding a specific project. Once these issues are resolved, the association then advises members of any changes and improvements.

Ness says creating an understanding of surety, what it can do and what it shouldn’t be expected to do means knocking on doors, talking with people whenever and wherever they can, including through conferences, social media, and meeting directly with owners. “There is no other product that does exactly what a bond does. We have a lot of information and resources on our website, printed material we can share, all focused on educating the industry and external stakeholders.”

This focus has been reflected in a rebranding exercise SAC undertook at its 20-year anniversary when the association’s former tagline changed from “the voice of surety in Canada” to “your bonding resource.”

Other changes that have evolved over time included product development, which Ness says became a necessity. “Up until 2012 we had essentially the same set of products we’d offered since WW II and we were promoting a one-size fits all approach.”

In 2012 SAC introduced a “process enhanced” performance bond and included a number of features that provide more clarity and transparency to the claims process and more responsiveness to a project owner’s notice of claim.

Ness says the product has seen big uptake and received positive reviews across the board. Later this year, an updated version of that bond will formally become the industry standard.

Challenged as many groups have been by looming retirement and a lack of young people being drawn to the industry, Martini-Wong says SAC has also had success with its Young Professional’s (YP) program.

“Many associations see their active membership and volunteerism focused on upper management within companies. Our YP program is focused on engaging the next generation, on getting them involved and aware of the issues.”

At last year’s annual general meeting, the YP group was treated to a speed mentoring session during a specially focused luncheon that gave them brief interval access to a variety of experts and industry professionals. “At this year’s AGM they will have the opportunity to sit down with the board, to ask questions, brainstorm, and to hear where SAC has been and where it is headed.”

Ness says initiatives like the YP group must focus both on attracting young people, and then engaging and keeping them. “The YP group gives our younger members a sense of identity within the industry and an opportunity to really connect.”

Other future initiatives include attendance at job fairs and career education events to make surety a deliberate career choice for young people.

Ness says there has been more change in the industry over the past five years than ever before, calling it a revolution that includes more customer engagement and focus, and initiatives aimed at bringing owners and industry together to make things even better.

One of the biggest changes has been the introduction of Bill 142, which has passed first reading and will receive second reading in the fall. The bill includes a clause stating that all public sector contracts will require “a labour and material payment bond and a performance bond, each for at least 50 per cent of the contract price”; a requirement found in the Miller Act in the U.S.

Martini-Wong says the bill modernizes the construction payment process and includes provisions that have previously existed in Canada. “We hope this will receive Royal Assent this fall and become law. Other provinces will be watching closely to see what happens in Ontario. If this passes here, there is hope it will be picked up in other areas as well.”

From the gang of five to a team of five

The current SAC team includes: Ness, founding member and president; Marva Brazel, office co-ordinator, who has supported the industry for a decade; Solange Bergeron, regional co-ordinator for the Quebec office, who has served for more than 15 years; Robert Sloat, western business development manager, who has been with SAC for eight years and, according to Ness “put SAC on the map in the west”; and Martini-Wong who, as the newbie, has been with the association three years.

“When you consider there are five people essentially running the country, addressing the regional interests and focuses that require dedicated time and energy, as well as the successes we have had, you can see why members are excited and perhaps, where the future might lead.”

As part of its 25th anniversary, and in conjunction with its strategic plan cycle, SAC staff has just completed a cross Canada tour, meeting with members in eight cities to gain feedback and insight. “When we did this exercise in 2012, members were pessimistic, expecting surety demands to drop off,” says Ness.

Instead, the industry has skyrocketed, he says, and the feedback from members reflects this. “They were far more buoyant (in 2017). There were some slight variations across the different regions, but the bottom line from all is that they are excited by the victories the industry has seen over the past year and they want more.”

Ness says feedback from the regional sessions will be added to board input on urgent imperatives in developing the next five-year strategic plan. “We’ll also be closely watching Bill 142 as we develop the plan and will plan accordingly.

In each location, members were also treated to a celebration of the association’s anniversary, which will culminate in the AGM and special anniversary gala Sept. 28 at the Royal York Hotel in Toronto.

As with other AGMs, the day is an opportunity to vote in the new board of directors and to recognize the ACSB (Associateship of Canadian Surety Bonding) graduates. Stewards of Surety – recently retired members who have contributed to the association and industry over their careers – will also be recognized.

Plans are also being finalized for a few surprises to mark the milestone.

The association plans to close out its 25th anniversary year with the publication of a long-awaited study on the economic value of surety bonds in all the provinces and across the country.

The study was conducted by the Canadian Centre for Economic Analysis (CANCEA) and illustrates the positive impact that surety bonds bring to the overall economy; particularly in the areas of GDP growth, job creation and tax revenues.

“The CANCEA study proves beyond any doubt that the true value of surety bonds extends beyond the simple compensation for construction losses” said Ness. The report will be made available to all construction industry stakeholders on the SAC website.

A SAC video describing the value of surety to taxpayers.