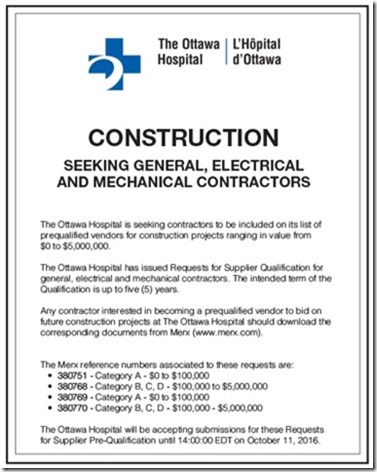 The Ottawa Hospital has modified its prequalification invitation for construction services including general, electrical and mechanical contractors, for projects ranging in value to $5 million.

According to an advertisement posted with the Ontario Construction Report eletter, the hospital says “the requests for supplier qualifications” will have an intended term of up to five years.

There are four separate MERX assigned numbers with relevant documentation. The hospital says the documents are now available on the MERX site.

The requests for supplier prequalification have been extended until 2 p.m. on Oct. 11 from the original Oct. 5 date. The MERX numbers have also been revised.