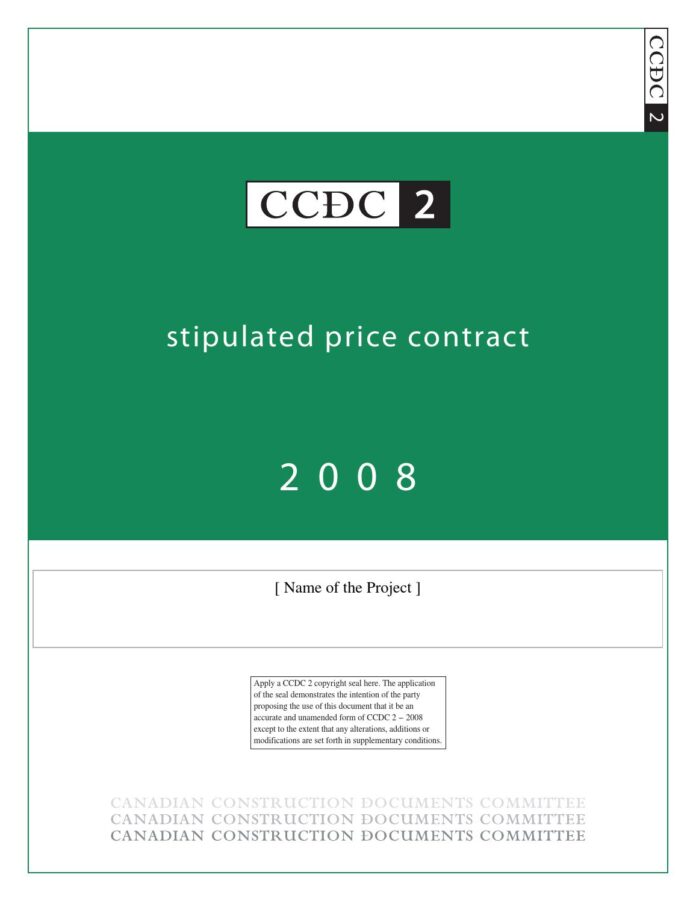 One of the more unique things about Canadian construction is that we are one of the few countries that utilizes standard form contracts. These are produced by the Canadian Construction Documents Committee, or CCDC as it is more commonly known.

These documents, developed from a national base of support, make us different from most other countries and provide us with some reasonable stability in how we do business when procuring design and construction services.

CCDC contracts and documents cover everything from the standard design-bid-build, design-build, construction management, unit prices and civil work, to name a few of their applications.

The standard documents provide a level of certainty and understanding for all parties on what constitutes the basis of an agreement. Make no mistake these documents are not perfect; but they are the work of an exceptionally large number of experts from across the country, including owners, who have worked hard to develop consensus documents that can be used as the basis for Canadian construction contracts.

Everyone involved understands the contracts’ basic terms — a phenomenal starting place not available in many other countries, including the United States. CCDC documents make it possible, with minor adjustments and supplementary conditions, to create fair and balanced contracts that everybody can agree with.

The unfortunate thing is that there are too many people who fail to understand the law of bidding and tendering as it applies to Canadian procurement. We have a lengthy legal history starting with Ron engineering that strengthens that process.

The documents provide fairness for all parties to the construction project and it is disappointing when those procuring construction decide that they are going to rewrite the document to suit themselves.

I have seen the standard 30-page CCDC2 document amended by adding anywhere from 34 to 50 pages of supplementary conditions. Such alterations, in my opinion, mean that it is no longer a standard form contract and as such should not be certified or even called a CCDC-2 document.

I have spent many years evaluating these contracts and their terms, while advising contractors and owners to help them reach reasonable agreements for a fair and balanced contract.

One of the things I find most often is, if you ask lawyers to rewrite contracts, that is exactly they will do. If you asked them to protect you, that is exactly what they are going to do.    However, that does not necessarily mean you are going to end up with a better contract. In fact, you are more likely to end up with an unbalanced, unreasonable, and unfair contract that will result in fewer bidders, higher prices, qualified bids, or no bids at all.

There is no doubt that supplementarys are needed and contracts must be designed for the specific projects for which they are being used. There are certain items that need to be added and contractors and trades have no problem with that. Problems occurs when risk is unfairly assigned and directed to the contractors and sub-trades, when the terms designed to create a balance of fairness are altered to favour only one side.

Recently, construction lawyer Robert Kennaley (rjk@kennaley.ca) copied me on a recent case decided by the Supreme Court of Canada. The case touched on standard form contracts and raises some particularly good points that may have an impact how contracts are used and amended in the construction industry.

The case involves an Uber driver who challenged the corporation regarding his contract. He was required to sign a contract which had numerous one-sided clauses in it. He filed a class-action lawsuit, which reached the Supreme Court of Canada. The judges ruled the contract had clauses deemed to be “unconscionable and therefore unenforceable”.

In determining what is unconscionable, one must look to the facts of the case. Two things come into play, “inequality of bargaining power” and “improvidence”. Reading the article and following the Supreme Court’s thinking, I cannot but realize that this is exactly what we in the construction industry have been arguing for many years. That trades and contractors tendering to owners are not in an equal relationship and therefore an inequality of bargaining power exists.

This occurs because of the inequality of the current tendering process and comes into play when contracts are formed that lead to unduly providing advantages to the stronger party, thus weakening the other party in the contract.

In making its decision, the Supreme Court majority reiterated that, while courts will generally defer to the parties as being best place to judge and protect their interests in the bargaining process, such deference presumes that the contract is negotiated freely agreed upon and accordingly fair.

The court thus made it clear that Canadian courts will not protect a sophisticated party from a bad deal, but they will, in appropriate cases, protect parties that cannot adequately protect their interests in the contracting process. They will not allow freedom of contract to impose a grossly unfair contract… “at the expense of a person (with) little understanding or bargaining skill,” the Supreme Court judgement says.

This non-construction decision that touched on standard contract language should be of interest to this industry, which uses standard form contracts for design and construction on a regular basis. These contracts should not unduly provide an advantage to the stronger party or disadvantage the weaker party.

The court accepted and looked at standard form or boiler plate contracts which, while being accepted, can have a few “dickered terms” but these dickered terms do not alter or impair the fair-meaning terms.

As we emphasize regularly to our members, it is vitally important that parties bidding on projects should review contract terns to ensure they do not create an inequality of bargaining power that would enhance the advantage of the procuring party at the expense of the bidders.

The case will not likely affect unaltered CCDC contracts. However, those that are excessively amended by supplementary conditions could be subject to review and possibly, overturning. However, at present there are few cases dealing with unconscionableability that would allow bidders to rely on the inequality of bargaining power in the tender process.

Kennaley followed up with more information in a later article titled: An Update on the law of Liquidated Damages, deposits and Other Forfeiture Clauses in Ontario.

I have always believed that a fair contract should be balanced. It needs to protect the owner’s rights but at the same time it must be respectful of the contractors and trades who are offering their services to build the project. Over the years, I have worked with many contractors and owners to help them develop their procurement policies and include reasonable supplementary conditions that are fair to all concerned.

The Ontario Association of Architects (OAA) and the OGCA developed supplementarys for the CCDC-2, which have been in use for many years and have alleviated a great deal of problems. We did not reinvent the wheel; we simply reviewed the gaps in the document that affected contracts in Ontario and created language to fill those gaps with reasonable supplementary conditions. We have done that with many owners, including the Ministry of Health for hospitals and with many municipalities. In each case this has resulted in better bidding, pricing, and competition for their projects.

What I take from this decision by the Supreme Court is that they recognized an especially important fact that often those bidding on contracts for construction projects are not on an equal footing, and as such contractors need to be very wary of new contracts with unbalanced terms.

Owners need to realize that they could be challenged if their contracts are deemed to be unreasonable and unfair. At present there are no cases directly on this point. Therefore, it would appear that the fact that the bidder has no real opportunity to negotiate the terms of the intended contract, that in and of itself may not establish the inequality of bargaining power required to meet the test.

Even for large contractors that depend on large public infrastructure contracts for their survival and cannot simply refuse to bid may be able to make the same case. This could require a change in the law of liquidated damages, which might become problematic for such contractors.

For additional decisions, see Uber, and Tercon Contractors Ltd. V. British Columbia (Minister of Transportation & Highways), 2010 SCC4. [2010] 1 S.C.R.69, and many other cases that have followed.

The Uber article can be found at inquiries@kennaley.ca; the title is, Uber, Standard Form Construction Contracts, and the Supreme Court of Canada.

As stated, this Supreme Court decision is not enough to level the playing field, but in my opinion, it is one of the building blocks. Owners need to understand we are not on the same footing and the continued downloading of unreasonable risk and conditions into our contracts must stop.

I expect there are going to be follow-ups to this decision, and the industry will be following developments very closely.

Clive Thurston is the former Ontario General Contractors’ Association (OGCA) president. He is not a lawyer. Thurston consulted with lawyer Robert Kennaley of Kennaley Construction Law (rjk@kennaley.ca), in preparing this column.