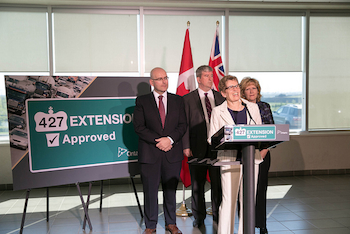 Infrastructure Ontario (IO) and the Ministry of Transportation (MTO) have shortlisted three teams to submit proposals to design, build, finance and maintain the Highway 427 expansion project.

Teams were evaluated based on their construction capability, experience, qualified personnel and financial capacity to deliver a project of this size and scope. Selection criteria also included assessing their understanding and experience in delivering similar projects in Ontario, as well as their ability to work with local companies and to administer relevant Canadian and Ontario standards.

The three highest scoring teams have been shortlisted. The following lists the prime team members:

These teams will be invited to respond to a request for proposals expected to be issued in early 2016.

The Highway 427 expansion project includes a new 6.6-kilometre extension from Highway 7 to Major Mackenzie Drive and a 4-kilometre road widening from south of Albion Road to Highway 7.