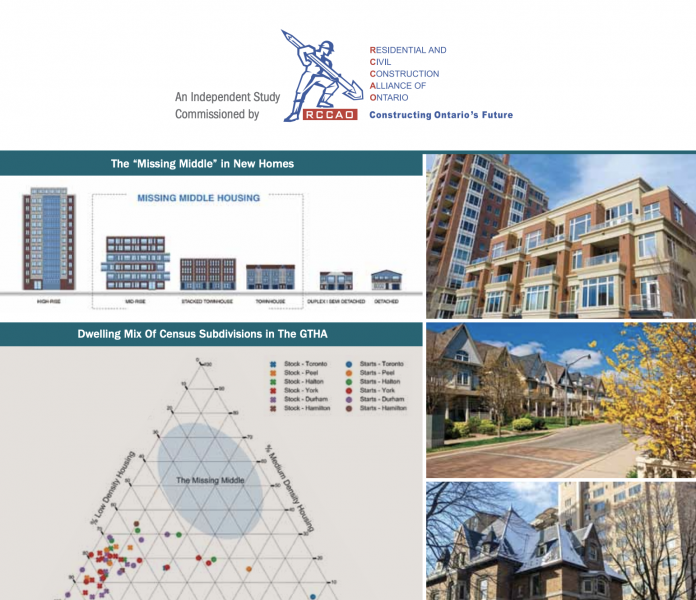 The Greater Toronto and Hamilton Area (GTHA) is at risk of missing provincial population targets, the Residential and Civil Construction Alliance of Ontario (RCCAO) asserts in a report it commissioned. This would potentially result in 7,200 fewer new homes being built each year until 2041, which creates context for the recent introduction of the Local Planning Appeal Tribunal (LPAT).

The GTHA’s Unbalanced Housing Stock: Benchmarking Ontario’s New LPAT System says that up to 165,600 homes are at risk of not being built over the next 23 years. That’s equal to an annual loss of $1.95 billion in GDP from residential construction activity if various constraints continue to inhibit the goals set by the provincial growth plan, Places to Grow.

Paul Smetanin,president of socio-economic research and data firm the Canadian Centre for Economic Analysis (CANCEA), says an important factor that will prevent the region from hitting provincial home-building targets is the lack of medium-density housing starts, or the Missing Middle.

“Hamilton has made the most progress on the ‘Missing Middle,'” Smetanin says. “Toronto, Mississauga, Markham, Newmarket less so, while Brampton is biased towards lower density starts.”

There are a range of issues among the region’s most populous municipalities, including:

RCCAO executive director Andy Manahan said: “We commissioned the report because we wanted to find out what the possible impacts of LPAT will be on delivering housing. We will work with provincial and municipal government officials to help ensure that the transition to the new LPAT system is as seamless as possible and does not create negative consequences for the housing supply in the province.”