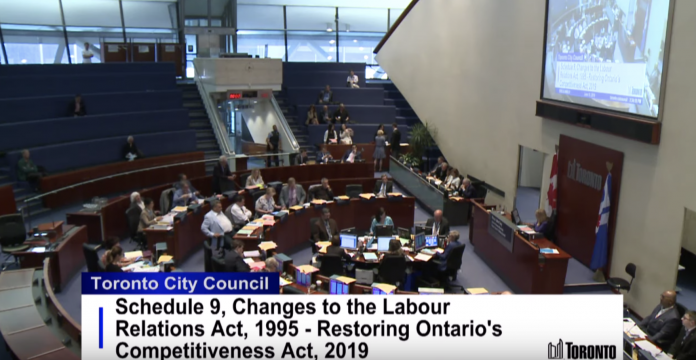 Toronto’s decision to opt out of legislation which would have allowed it to use non-union contractors for city construction projects puts the city in the unique spot as being the only Ontario municipality where unionized workers have sway over politics and business.

Other municipalities currently subject to mandatory collective bargaining with construction unions have decided to go along with the provincial government’s Bill 66, which ends the construction unions’ exclusivity unless cities specifically elect to opt out of the new rules.

Representatives of non-union contractors say they plan to take Toronto to court over its decision to continue with its status as a “construction employer”. The same litigation issue – but on the converse side – is anticipated in Hamilton, where its city council decided to “do nothing” — and by that, allow the Bill 66 provisions to go into effect.

Toronto council voted 20 to 4 in favour of maintaining the status quo with organized labour. It also voted in favour of allowing the Labourers’ International Union of North America (LiUNA), to bid on city construction work. It is unclear if LiUNA’s participation will add to jurisdictional tensions with the other construction trade unions – as LiUNA has worked with Doug Ford’s provincial government in seeking greater access to work in areas considered protected by the other trades.

The Globe and Mail reports that, on the same day Toronto voted to stick with the unions, a Hamilton City Council committee voted 11 to 1 in favour of allowing all qualified companies to bid on city construction contracts. Hamilton council will decide the issue on Wednesday. Waterloo Region and Sault Ste. Marie have also endorsed open bidding, the newspaper reported.

The government amended the legislation in March, giving municipalities and other public entities the choice of opting out of the new rules and maintaining the status quo.

Toronto councillor Anthony Perruzza argued at Wednesday’s meeting that the city should opt out.  His passionate pro-union speech (and council’s support of his position), came despite a report from Toronto city manager Chris Murray recommending that the city do nothing and, with increased competition, would save between $2 million and $48 million a year on its construction contracts.

“Everybody understands that the numbers being bandied about probably aren’t true,” Perruzza said. “It’s really an ideological debate that has been foisted on us.”

However, Councillor Jaye Robinson argued that the city should end its long-standing agreements with nine labour groups. “What are we afraid of?” she said. “Opening the market to everyone?”

Toronto is bound to nine province-wide collective agreements in the industrial, commercial and institutional (ICI) sector. Contractors must work with the nine unions for ICI projects in the city, which Toronto awarded approximately $2.6-billion in contracts in 2018 for all goods and services and $616- million of those contracts were in the ICI sector.

The Progressive Contractors Association of Canada (PCA) said in a statement on Wednesday that it plans to legally challenge Toronto’s decision to reject Bill 66 and invite LiUNA into a group that has “monopolized” city construction projects for years.

Conversely, in Hamilton, a representative of the union that stands to lose work, the United Brotherhood of Carpenters and Joiners of America Local 18, did not rule out taking legal action.

“The reality is that there are labour rights, they can’t just be wished away,“said Kim Wright, a consultant to the Carpenters’ Union, when asked by Councillor Brad Clark if it was the union’s intention to challenge the matter in court, the Globe and Mail reported.

Clark said before the vote that the situation was “challenging” for the city because the province had put it in a position where it could face a potential lawsuit for not upholding the collective agreement with the Carpenters’ Union.

Hamilton’s staff had recommended open tendering. Currently all of the city’s carpentry work must be completed by contractors with Carpenters’ Union collective agreements.

The committee’s vote was in line with a report by city staff recommending open tendering.

Meanwhile, In Sault Ste. Marie, the city has been bound to provincial union agreements with the United Brotherhood of Carpenters and Joiners and LiUNA for more than 30 years. There was much lobbying by non-union contractors there to end the exclusivity before the Conservative government won the last election, usurping long-standing relationships between the former Liberal government and the building trades unions. Accordingly, the city is going along with the Bill 66 changes.

As well, The Region of Waterloo will end its union exclusivity, saying it expects that moving to open tendering will translate into savings of between 3 per cent and 30 per cent. The Globe and Mail reports that Waterloo region also said that the number of bids it received following union certification in 2014 dropped by more than 50 per cent.

In a statement, Merit Ontario said it was disappointed with Toronto city council’s decision and was considering all options, including legal action.

City of Toronto councillors voted to remain bound by costly and discriminatory labour agreements despite numerous studies showing that the cost to the taxpayers of Toronto could be in excess of $100 million dollars and against the city staff recommendations, the association said.

“Merit Ontario is disappointed by the city council vote which shows an utter lack of respect for taxpayers,” said Merit Ontario executive director Michael Gallardo. “Hard working Toronto taxpayers that are open shop or don’t belong to the right union will continue to be excluded from working on infrastructure projects paid for with their own tax dollars.”

“Toronto is facing a budget crunch, and council said no to the easiest way possible to give itself options and the ability to be leaders for the next generation of taxpayers.”

“The savings realized through open tendering could have went to 8,000 new child care spaces or 64 million school lunches,” Merit Ontario said. “Unfortunately, money is now going to well connected insiders instead of being used for other much needed additional services and city projects.

“Savings compounded for many years add up and can really make a difference for the residents of City of Toronto. It’s a shame this decision is so short-sighted.”

“Merit Ontario is considering all options after this disappointing vote including legal action,” the statement said.

The City of Hamilton moved quickly to implement new processes that...