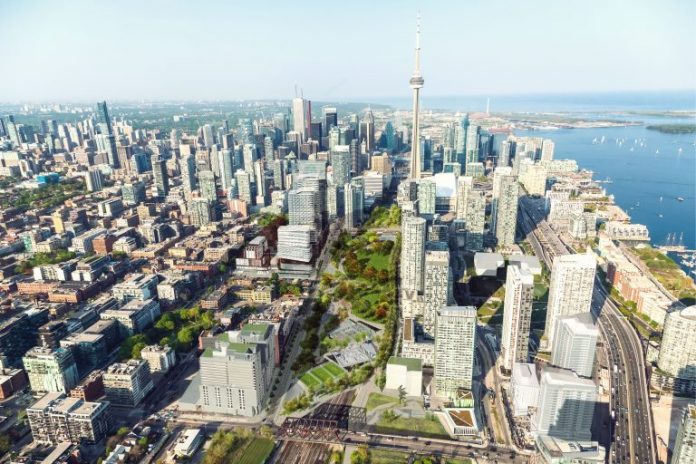 Toronto city council has unanimously voted to move forward with plans to acquire the air rights of about three acres of air space beside Union Station for a massive park over existing train tracks in the city’s downtown.

Rail Deck Park is planned to be built above the trail corridor between Bathurst Street and Blue Jays Way – covering a total of more than 20 acres.

“Rail Deck Park is a once in a generation city-building opportunity to transform space for residents, workers and visitors. With this report, we get another step closer to realizing the larger vision for Rail Deck Park. As the local City Councillor, I am proud to support it,” said Councillor Joe Cressy (Ward 10 Spadina-Fort York)

“With today’s unanimous vote to proceed with acquiring the air rights, we took a big step towards building Rail Deck Park,” Councillor Joe Cressy said in a statement on Twitter. “Great cities invest in their future. Rail Deck Park is such a moment. It is the type of big city-building move that Toronto is ready for.”

Rail Deck Park is a city-led proposal for a new park of approximately 20 acres above the Union Station Rail Corridor, between Bathurst Street and Blue Jays Way. The implementation strategy was first approved by in 2016 and Council also adopted an Official Plan Amendment that designated the area of the rail corridor for parks and open space. The OPA was subsequently appealed and upheld by the Local Planning Appeal Tribunal in 2019.

According to a staff report, the downtown rail corridor area is the last remaining site suitable for a large park (more than 7 acres in size) to support growth in the Downtown. In keeping with the principles of the recently-approved parkland strategy, Rail Deck Park will connect the broader parks and open space system, unite surrounding attractions – Rogers Centre, Ripley’s Aquarium and Fort York into a “major destination district” and enhance regional connectivity by integrating with the planned GO Expansion program.

The massive development would add significant and much-needed greenspace for current concrete-bound residents and is expected to become a major tourist destination – compared to Central Park in New York City. Implementation of this park is intended to be phased to help manage the anticipated cost and complexity of the project.

Before construction can begin, however, the city needs to gain ownership of the space above the tracks. Currently, the air rights over the tracks, between Bathurst Street and Spadina Avenue, are owned by Craft-Kingsmen Rail Corporation.

Negotiations with the owners to acquire air space at fair market value have been ongoing since 2018 with no success to date.

Together with the City’s existing Northern Linear Park property, acquisition of the air space sought by the City at this time would give Council the opportunity to pursue the development of a new park of up to 1.6 hectares (four acres) of the proposed eight-hectare (20-acre) Rail Deck Park.

“We are taking the next important steps to make progress on Rail Deck Park. Moving forward on acquiring this air space brings us closer to getting Rail Deck Park underway. Focusing on the eastern portion of the site would maximize the impact of the private sector public realm investment planned next door and gives the city more park space sooner,” said Mayor John Tory.

Council’s recent vote focused on securing a three-acre section of air rights between Blue Jays Way and Spadina Avenue for the first phase of the park project. The space is currently owned by CN and Toronto Terminals Railway and council approved a motion to create an agreement to either buy air rights for fair market value or to expropriate the needed land.

“We would like to take one more try at negotiating first because that’s always the preferable way to proceed with projects like this,” Mayor John Tory told reporters before the council meeting.

The City has been in negotiations to purchase the remaining air rights from Craft-Kingsmen Corporation. But those discussions have been at an impasse over a disagreement between the City and the developers over the price.

About Helmets to Hardhats Canada