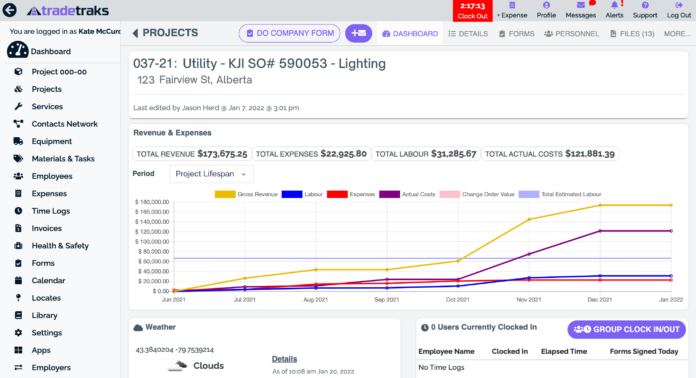 A small local start-up based in Hamilton has been quietly building what the business says is set to become a game-changer for the construction and service industry. In collaboration with over 1,200 early adopters, the team at Tradetraks has built a complete, user-friendly platform for people working in the trades, the company says in a statement.

“Tradetraks is purpose-built to focus on streamlining the four core pillars of a successful business; Operations, Communications, Financials, and HR + Safety,” the statement released in late January says. “Each of these are represented as a ‘trak’ within the platform and are designed to help owners control every aspect of their business from one powerful platform.”

Tradetraks is the creative work of Jason Herd, president and owner of Fairway Electrical.

What started as a SaaS to help Fairway Electrical grow, quickly evolved into a feature-rich platform that the entire trades community can benefit from, he says.

With the help of Tradetraks, his electrical contracting company landed on Canada’s Fastest-Growing Companies list two years in a row. “We know what contractors need because we needed it. Software like Tradetraks simply hasn’t existed until now. It changes everything”

“Tradetraks has the vision to disrupt the saturated market of SaaS solutions by continuing to evolve and grow its offering and the features within the available traks,” the statement says.

Ontario’s updated Construction Act could set the bar for the rest...