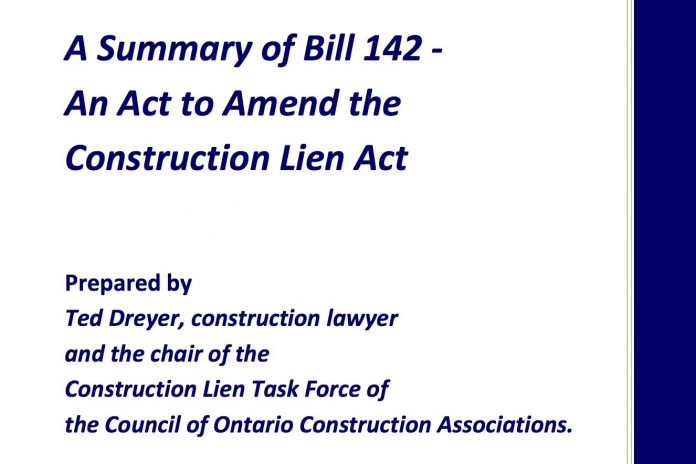 “Bill 142 is a substantial and complicated piece of legislation,” he writes. “It will take time to fully digest its effect and implications. Here are two issues that I noticed on my preliminary review of the Bill.”

First, there is potential conflict between lien rights and adjudication. If, for example a sub-contractor loses an adjudication, should they have the right to file a claim for lien for the full amount of their claim despite the ruling?

Second, it is unclear how mandatory payment of the holdback is intended to work as between contractors and subcontractors.

Advocates for prompt payment often cited the example of the excavator who has to wait until the end of the project in order to receive their holdback. On the one hand, Bill 142 appeared to make a subcontractor’s basic holdback payable upon the expiration of their lien rights, meaning 60 days after their date of last supply. On the other hand, the new section 27.1 allows a “payer” to withhold payment of the holdback by delivering a notice of non-payment within 40 days of the publication of certificate of substantial performance. That suggests that subcontractors are not expected to be paid their holdback until the entire project is found to be substantially complete. If so, that tends to defeat the objective of prompt payment.

Dryer says “Hopefully these two issues can be addressed during the committee process.”