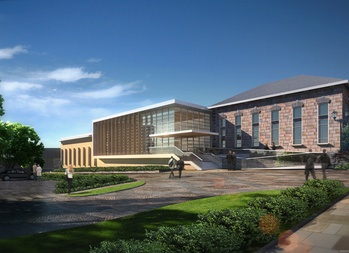 PENETANGUISHENE – Waypoint Centre for Mental Health Care, Integrated Team Solutions, government officials, staff and volunteers joined together today to celebrate the substantial completion of the new hospital with a symbolic key exchange, Infrastructure Ontario has reported in a news release.

The major portion of construction is now complete in accordance with the project agreement and the facility is ready to turn over to the hospital.

Built on Waypoint’s existing site, the new forensic mental health building replaces the 160-bed Oak Ridge Facility and the 20-bed Brebeuf Facility, offering a larger, more modern and consolidated space for treatment and care of people with mental illness who have come into contact with the law.

The construction project began in February 2011 and has created hundreds of jobs through the employment of local trades and construction related suppliers. At the height of construction, as many as 300 workers were on site daily. Labour and materials for the project were largely drawn from the Midland, Barrie and Simcoe County areas.

The new building will be open for patient care on March 3, 2014. Hospital-led transition and move planning, which has been underway since last year, will continue within the new building, and includes:
. training and orientation
. patient readiness
. new partnership processes including Honeywell’s role as the maintenance provider

This project was delivered on time and on budget using the province’s Alternative Financing and Procurement model.

The facility was designed and constructed to adhere to the guidelines and sustainability principles of Leadership in Energy and Environmental Design (LEED) Gold certification. LEED standards focus on healthy indoor environments, reduced greenhouse gas emissions and efficient use of energy, water and other resources.

Infrastructure Ontario and the Ministry of Health and Long-Term Care worked with Waypoint to develop the new forensic hospital and campus addition, which will remain publicly owned, publicly controlled and publicly accountable, the news release said.