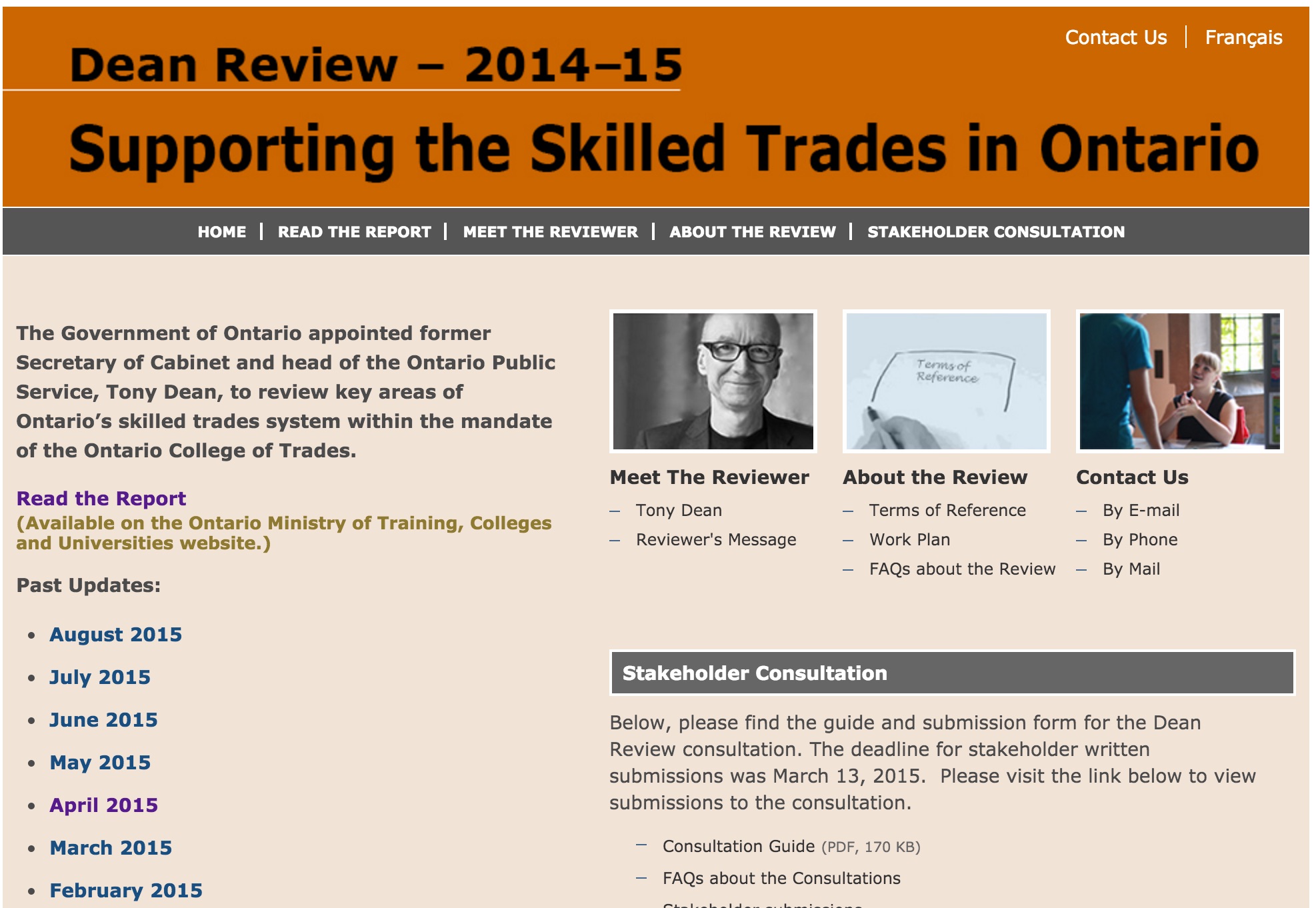 You can tell who won, and who lost, in the results of Tony Dean’s review of the Ontario College of Trades (OCOT), by reviewing the news releases issued in reaction to his report and the provincial government’s decision to implement it.

However, the Labourers International Union of North America (LiUNA) and employers groups such as the Residential Construction Council of Ontario (RESCON) say they support Dean’s recommendations.

The certified construction trades issued a news release saying they “are united in their concern at the government’s decision to move hastily in implementing recommendations contained in a review of the OCOT prepared by Tony Dean for Training, Colleges and University Minister, Reza Moridi.

“The fact that the government would move unilaterally without discussing the recommendations with stakeholders is troubling considering how wide ranging Dean’s proposed recommendations are,” said James Hogarth, business manager from the Ontario Pipe Trades Council.

“Dean’s recommendations have far reaching impacts on worker and public safety,” said Tim Fenton, business manager of the Ontario Sheet Metal Workers Conference. “In the government’s rush they are pushing changes without understanding how these changes will affect the trades.”

“The concept of the college is right but Dean’s report is offside with the core idea of a self-governing and regulatory body. The fact that the government is blindly following these recommendations is troubling,” said Mike Gallagher, business manager, International Union of Operating Engineers.

“The government’s decision to not hold any consultation on this report is a slap in the face to stakeholders,” said John Grimshaw, executive secretary treasurer of the IBEW Construction Council of Ontario. “This is a departure from the normal course of action for a government that trumpets consultation.”

Meanwhile, the labourers’ said in a news release that the Dean Report provides a roadmap to ensure the long-term success of the OCOT. “Mr. Dean has delivered a solid report and we are encouraged that both the Ontario Government and the Ontario College of Trades have accepted his recommendations,” said Joseph Mancinelli, LiUNA international vice-president and regional manager of central and eastern Canada region. “This report provides a good path forward to ensure that OCOT will work in the public interest and promote the trades in Ontario. Dean’s recommendations strike the right balance for labour and business in the construction industry.”

“LiUNA Local 183 participated actively throughout the OCOT Review process on behalf of the over 46,000 Ontario construction workers we represent,” said Jack Oliveira, business manager of LiUNA Local 183 and LiUNA Ontario Provincial District Council. “Throughout his review, Tony Dean demonstrated a strong commitment to transparency and a rigorous analysis of the issues, and we appreciated his accessibility and openness with all participants. Our confidence in his independence, broad expertise and thorough understanding of the complexities of the construction sector was widely shared.”

LiUNA said in its news release that the recommendations presented in Dean’s report will have significant positive impacts for trades and the construction industry, including:

It is vital that the Ontario Government ensure that the vision and intent of the final recommendations are translated into practical changes to OCOT. LiUNA Local 183 looks forward to working alongside the Ontario Government and OCOT to ensure that Dean’s recommendations are implemented effectively and make a positive impact on tradespeople and the broader economy, the union said.

“LiUNA Local 183 believes that Dean’s recommendations will go a long way towards providing the balance that has been missing from OCOT. They underscore the importance of evidence and expertise when making decisions that fundamentally impact tens of thousands of hard-working Ontarians and the well-being of a vital sector of our economy,” said Oliveira. “Together, we can ensure that OCOT works for the tradespeople building Ontario up, the businesses that hire them and the greater public interest.”

Inclusion in construction: How an architect, contractor and union are taking...