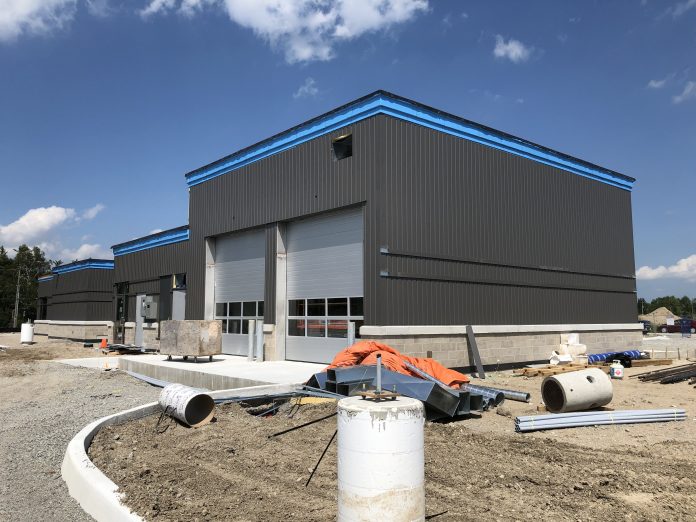 The Barrie-based construction business celebrated the official opening of the Elmvale Health and Emergency Services Centre last week – its third paramedic station build in Simcoe County in the past three years.

“Over the past three years our Bertram team has worked tirelessly to ensure our projects were successful,” said project manager Tyson DeNobrega. “We have also had the good fortune of having reliable trades and suppliers to compliment our efforts. Which has brought our projects in, not only on time, but also on/under budget.”

The Elmvale building – which replaces two previously leased facilities for the County – is a unique joint services facility housing a paramedic station and an adult day program.

“This is another example of the county continuing to make responsible and impactful investments in our communities,” said county warden George Cornell. “Both Paramedic Services and our Adult Day Program are vital lifelines to the residents they serve, and the new Elmvale Health and Emergency Services Centre will enable the County to better control long term costs and meet growing demands for our services.”

The county had outgrown the leased space at the Elmvale Fire Hall, which was originally set up for a single paramedic response unit 12-hours per day. It was being used to house a 24-hour, fully staffed paramedic transport unit. This new two bay station meets current needs, while allowing for future resources as demand requires.

The new $3 million facility is a single-storey, 552 sq. m. building that includes a paramedic lounge, offices and (near future) backup generator that will allow the station to function during power outages, and a 225 sq. m. low capacity day centre and outdoor patio for seniors that was designed barrier free.

It also allows the county to increase capacity at the Elmvale Adult Day Program, which was previously leased out of the Manse of St-John’s United Church in Elmvale. The new space will allow for an increase in capacity and reduce the existing waitlists for the program.

The county will provide services to an additional eight residents per day in the expanded facility (total of 18 per day), who can participate in crafts, socialize and relax in a safe environment suitable for residents with limitations.

Bertram got the green light to start construction in late 2018, with mobilization the first week of December and an expedited nine-month construction schedule.

“This meant excavation and foundations to be completed through the dead of winter,” said DeNobrega. “Measures had to be taken to prevent the ground from freezing and to provide the concrete footings/foundation walls a proper environment to cure.”

Crews worked with an insulated tarp tunnel and forced air propane heaters in conjunction with staged excavation to fend off the bitter winter weather.

“It was a difficult task, but with proper planning and the dedicated work of our superintendent and forming contractor the foundations were completed on time and passed inspections with flying colours,” DeNobrega concluded.

Last week’s ceremony in Elmvale was almost exactly a year after a new emergency services station opened in Collingwood.

Also built by Bertram, the new 6,000-sq. ft. facility replaced a 4,200-sq. ft. building that was about 30 years old. With a cost of $4.2 million, it features advanced security and efficiency.

Ambulance bay doors are operated using an air compressor and have radio frequency identification, which allows them to open automatically when an ambulance is going or returning to a call.

“It’s a faster system, more efficient,” said Shane Smith, deputy chief of logistics for the paramedics. “Allows the doors to go up so we can get out of the station faster.”

The garage also features radiant floor heating, which prevents ice and snow build up on the doors during the winter – heating bays more efficiently and drying vehicles faster. A controlled lighting system and high efficiency heating and cooling system were also built in.

The third Bertram project was a three bay, nine-ambulance paramedic station in Orillia.

For DeNobrega, all three projects were rewarding, but Elmvale was a bit more significant.

“I grew up in Wasaga Beach and attended high school at Elmvale District High School, so this project gave me a chance to personally give back to the community,” he said.

“As for the building itself, this multi-function space was well thought-out/ designed, offering efficient functionality for all users to maximizing community service offerings for the area.

“As far as I know, is the first building of it’s kind in our area.”

Now, with a growing track record of successful projects, DeNobrega is proud to say that Bertram have formed a great relationship with the County of Simcoe.

“Hopefully, this will continue offer Bertram even more opportunities in the future,” he said.

“Being in business since 1934, Bertram has relied on our community’s support just as much as we have invested into it. We have formed deep roots in our community by always remembering where we came from and never forgetting the clients and partners that have helped us get to where we are today.”

Projects such as paramedic stations help to build community, and DeNobrega sys he is proud to be involved in community-based projects.

“We purposefully align ourselves with projects that not only make sense for us, but also impact our community in a positive way,” he said.

“In turn, this also helps our team stay passionate about their trade and the contributions they make in our community.”