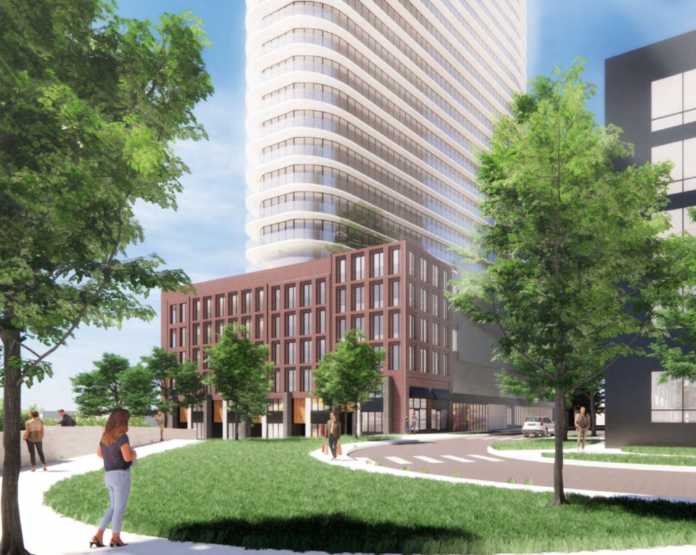 Barrie’s planning committee has approved official plan and zoning bylaw amendments to allow the tallest development in the city’s history to proceed near waterfront.

There has been strong public opposition to the height and density of the development, that would be Barrie’s tallest towers.Final council approval was expected in early January.

“It’s the biggest development ever seen in this city’s history. I recognize the fact that not everyone is going to be happy,” said Councillor Keenan Aylwin.

Council’s job, he explained, is to find a balance that respects the existing neighbourhood “as much as possible” while recognizing the need for growth.

“We need to start building up.”

Aylwin called the compromise and slightly lower heights “a significant improvement from the original application.”

If approved, the area will include residential rental units, commercial space and a 152-room hotel on the site located at 51-75 Bradford St., and 20 Checkley St.

SmartCentres, on behalf of Barrie Lakeshore Developments (Greenwin Barrie and a numbered Ontario company), has submitted applications to develop a mixed-use project on this 8.6-acre property between Lakeshore Drive and Bradford Street. This project also includes a parking garage, open space and environmental protection land.

A rezoning and Official Plan amendment are both required for this project to go ahead. A site-plan control application has also been submitted.

However, Jersene Bellavance, a retired landscape architect who lives in the vicinity argues that “the scale and mass of the proposed towers are not compatible with the character of our existing waterfront condos.”

“How the city planners and the city councillors could allow such a scale of development is beyond unconscionable,” Bellavance said. “The outdoor human experience is greatly compromised by the size and scale of the proposed podiums creating narrow corridors within the site and overbearing facades along Lakeshore Drive.”

Councillor Mike McCann disagreed, calling the development “a win” for the city and current residents.

“I believe it’s the best for the city,” he said. “We are mandated by the province to have 100,000 people move into our city over the next 20 year,” McCann said, adding that 50,000 new residents will need housing options within existing city borders.

Continued urban sprawl would be “much more environmentally devastating” than building massive residential buildings, he said, arguing in favour of reinstating the taller option.

“Think about the environment and maybe less about the false sense of accomplishment. This is a strong win-win-win for everyone in the city of Barrie.”